Former BCCI president Thakur stated that the appointment Arun Dhumal, his brother, as the BCCI treasurer is matter of pride for the state.

Former Board of Control for Cricket in India (BCCI) president and the current a union minister of state for finance and corporate affairs, Anurag Thakur on Saturday came down heavily on the International Cricket Council (ICC).

Thakur, who was in Hamirpur, Himachal Pradesh in connection with the Sansad Mahakumbh prize distribution ceremony, said that the world cricket’s governing body “has no relevance” without the Indian cricket board, which used to give the ICC 75 per cent of grants to run its affairs.

“The ICC has no relevance without the BCCI as it used to give it seventy-five percent of grants to run its affairs,” Thakur was quoted as saying by PTI.

Thakur also said that he hopes that the BCCI, after Sourav Ganguly became its president, will take up this matter with the ICC and get its due.

Thakur stated that the appointment Arun Dhumal as the BCCI treasurer is matter of pride for the state. Arun is Thakur’s brother and the former BCCI president said that his brother would do his job honestly.

Arun had recently stated that India not having a “say” in the ICC is a cause of major concern. He had also questionned the relevance of ICC if it does not have India in a prominent role.

Thakur, who is no longer directly involved in BCCI’s affairs anymore, meanwhile also said that he is willing to guide the BCCI on a certain matters. 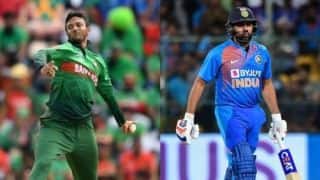