The ECB came out in defence of Moeen Ali saying he has not committed any offence.

England cricketer Moeen Ali risked disciplinary action after the International Cricket Council (ICC) said they were “investigating” his decision to wear wristbands in support of Gaza during the third Test match against India on Monday. Ali wore wristbands that read “Save Gaza” and “Free Palestine”, while batting during England’s first innings at the Rose Bowl in Southampton.

An ICC spokesman told AFP: “We’re investigating and will report in due course.” Meanwhile an England and Wales Cricket Board spokesman told reporters at Southampton that, “as far as we are concerned, he has not committed any offence,” adding it was up to the ICC to decide what action, if any, Ali should face.

The ICC regulations prohibit players from displaying political, religious or racial statements on their clothing and equipment while taking part in international matches.

“We have always worn wristbands or ribbons when showing support 4 an incident or raising awareness,we do it for animal rights too,y not humans,” [sic] wrote former Pakistan cricketer Azhar Mahmood.

The 27-year-old Ali, a practising Muslim of Pakistani descent, was photographed earlier this week helping raise funds for Gaza relief efforts in his home city of Birmingham in central England.

The Worcestershire all-rounder’s wristbands were only on public display for 42 minutes while he made 12 runs off 28 balls before he was caught off India seamer Bhuvneshwar Kumar. 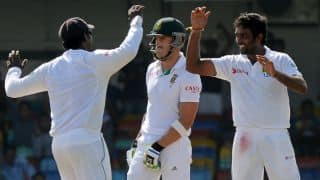