Shane Watson produced a solid all-round performance as Australia launched their campaign in the ICC World Twenty20 with a seven-wicket thrashing of Ireland on Wednesday. 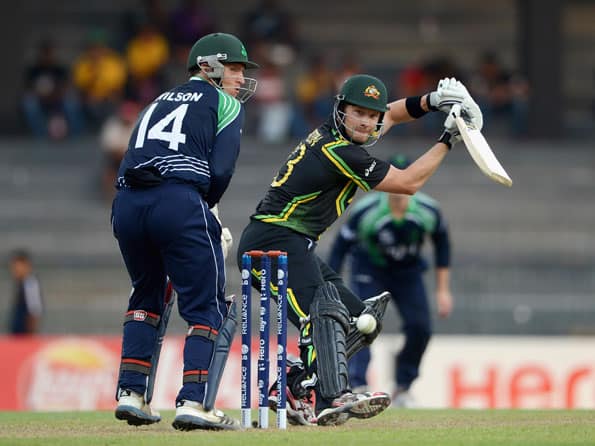 Shane Watson produced a solid all-round performance as Australia launched their campaign in the ICC World Twenty20 with a seven-wicket thrashing of Ireland on Wednesday.

Chasing a modest target of 124, the Aussies romped home in only 15.1 overs with the opening duo of Watson (51) and David Warner (26), having set the tone by adding 60 runs in the first seven overs in the opening Group B encounter at the R Premadasa Stadium.

Watson’s 51 came off 30 balls with help of five boundaries and three huge sixes. By the time he got run out at his team’s total on 91, the result had become a mere formality.

Watson had earlier scalped three Ireland wickets for 26 runs — including the wickets of O’Brien brothers Kevin and Niall — from his four overs as Australia restricted their opponents to 123 for seven.

The target was never a problem for the formidable Aussies as Watson started the onslaught in the fourth over which was bowled by Trent Johnston. After hitting the pacer for three boundaries, Watson flicked him over deep square leg for his first six.

The second six off Paul Stirling went over deep mid-wicket boundary. But the stand-out shot certainly was the one Watson hit off left-arm spinner George Dockrell to bring up his half century. The batsman rocked back and muscled it into the deep mid-wicket stands. The ball rebounded off the balcony of the upper tier of the stadium.

Watson’s 50 came off only 28 balls. He was run-out immediately after that but not before he had taken his side on the verge of victory.

Earlier, Australia kept Ireland batsmen under tight leash restricting them to 123 for seven.

It was owing to a 52-run fifth wicket partnership between O’Brien brothers — Niall and Kevin — that Ireland managed a total in excess of 120 after they were reeling at 33 for four in the eighth over.

Shane Watson was the most successful Aussie bowler with figures of three for 26. More importantly, he dismissed both the O’Brien brothers in one over.

While Kevin scored 35 off 29 balls with five fours, Niall managed 20 off 24 balls with two boundaries after the minnows decided to bat upon winning the toss.

Australia were off to a perfect start when Watson removed Irish opener William Porterfield with a bouncer. The left-handed opener tried the hook shot but the ball ballooned up and Starc standing at deep fine-leg took a simple catch.

Other opener Paul Stirling (7) during his 12-ball stay tried to smash each and every delivery. Finally, he slashed hard at an angular one from Starc but it was Watson this time who decided to return the favour by taking a well-judged catch in the deep third-man region.

Former England international Ed Joyce hit three fours but never looked like being in control of the situation. His frustration got better of him when Glenn Maxwell came to bowl his friendly off-breaks. Joyce couldn’t clear David Warner at mid-off and fell for 16.

With 25 for three even before the sixth over was complete, George Bailey’s boys had complete command over the situation.

Soon it became 33 for four when Gary Wilson was adjudged leg before when he padded a flipper from left-arm spinner Brad Hogg.

The O’Brien brothers, however, managed to revive the situation. While Niall was happy to play the second fiddle, Kevin decided to take on the bowlers.

He started with couple of fours off Hogg. But the stand out shot during his innings was a lovely drive through extra cover region off Dan Christian’s bowling.

When Starc came for his second spell, Kevin launched into the left-arm seamer pulling him for his fourth boundary. The fifth one came when he created room to smash one through the off-side cordon.

The 50-run partnership for the fifth wicket came off 41 deliveries but then Watson struck decisive blows coming in for his second spell.

Niall missed the line of a fuller delivery, while Kevin got one that took off and he only edged it to Mathew Wade behind the stumps.

Suddenly from 85 for four, Ireland were again in trouble at 86 for six. It was Nigel Jones, who chipped in with an unbeaten 14 to take Ireland past 120.(PTI)