Mumbai: Swashbuckling England allrounder Ben Stokes today said playing aggressive cricket has worked well for the side recently and it would approach the ICC World Twenty20 2016 with a similar mindset. “It has worked since Trevor (Bayliss) came in as a coach. He gave more of that freedom. We played this attacking and positive brand of cricket. We started doing that in the last 12-18 months. It has worked, so why stop doing that,” remarked the 25-year-old Stokes in the open media session. “We got the criticism in South Africa, two (T20) games we lost. But we won six games in a row before that. T20 goes like that. You can win some and lose some,” the New Zealand-born player said. ICC Twenty20 World Cup 2016: England team will be brash and aggressive, says Eoin Morgan

The left-handed batsman, who scored the fastest Test 250 for England against South Africa in Cape Town this January, believes that they have a balanced side for the competition. “We have got three spinners now, not just part time but they are front line spinners, so we have got the option of picking from them, now we could look to play all three if need be. And they could bat as well, so we have got options everywhere. We have got left-handers (bowlers) and (also) pacers David Willey. We should only get out there (on matches) and execute (the plans),” he said. He felt that the tournament will definitely be a challenge for England, vis-a-vis playing spin bowling, but pointed out that the side has played well against teams which have good spinners. Ben Stokes better player than what I was at age 24: Ian Botham

“Yeah, it’s going to be a challenge, but we have shown in the recent series against Pakistan. We beat them 3-0 in the T20 series, so it actually showed that we can actually do against really good teams who rely heavily on spin,” Strokes said. According to him, the team has enough time ahead of its opening game against the West Indies on March 16 at the Wankhede stadium to get adjusted though many of their players have not played in India.

“Not playing in India… that’s the thing we do not have, the experience of playing in India. We have a good build-up period (before the opening match), with a few warm-up games. We have to take full advantage of the facilities here,” he said. England, who recently lost to South Africa in the T20 series are in Group 1 which has teams like Sri Lanka, West Indies and South Africa. He said he looks forward to playing in the Indian Premier League and described the competition as a major one. 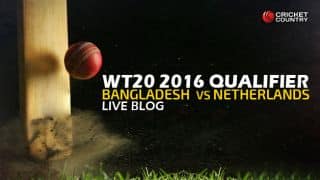