The mighty Dhauladhar peaks in the HPCA’s showpiece stadium’s backdrop, the nearby British era tea estates and the spiritual pull of globetrotting Buddhist monk -- the Dalai Lama -- always give cricket buffs a time to relax and introspect.

Dharamsala, March 9 (IANS) The political game over the staging of the India-Pakistan cricket match in Dharamsala and later shifting it out of Himachal Pradesh has resulted in a revenue loss to the state’s hospitality industry. “The shifting of matches has led to a revenue loss of more than Rs.100 crore to the state exchequer,” Himachal Pradesh Cricket Association (HPCA) press secretary Mohit Sood told IANS on Wednesday. He said over 22,000 tourists, mainly from the plains of northern India, were likely to have visited Dharamsala during the match slated for March 19. The International Cricket Council (ICC) relocated the India vs Pakistan group stage World T20 match, to be played on March 19, from Dharamsala to Kolkata citing security reasons. SCORECARD: India vs Pakistan , 19th T20 Match, Super 10 Group 2, ICC T20 World Cup 2016

HPCA officials say the local hospitality industry was to get a major boost as a galaxy of Bollywood stars and corporate honchos were slated to descend here to witness the match. Business tycoons like Reliance Industries chairman Mukesh Ambani, Videocon owner Venugopal Dhoot and Adani group chairman Gautam Adani had made their bookings for the match, a senior HPCA functionary said.

He said union ministers Arun Jaitley and Piyush Goyal and BJP national president Amit Shah had also expressed interest, besides other politicians, in the match. The town has 56 registered hotels and guest houses with a bed capacity of 1,100. Similarly, McLeodganj, the uphill quaint town that is the abode of Tibetan spiritual leader the Dalai Lama, has around 91 registered hotels with a capacity to accommodate 1,000 people.

Pankaj Chadha, owner of Mc’LLo restaurant-cum-pub in McLeodganj, said the hosting of the match would have certainly increased tourist footfalls. “We were expecting huge guests. Since the match was on Saturday we were expecting they would extend their stay at least for a day after the match,” Chadha told IANS.

The mighty Dhauladhar peaks in the HPCA’s showpiece stadium’s backdrop, the nearby British era tea estates and the spiritual pull of globetrotting Buddhist monk — the Dalai Lama — always give cricket buffs a time to relax and introspect.

“We were planning to spend a day in McLeodganj to know about Tibetan culture after the match. It’s really sad to know that the match has been shifted out of Dharamsala,” said Deepak Sharma, a Chandigarh-based entrepreneur.

His friend Saurabh Gupta said they had booked the hotel in advance and now they would get it cancelled. The popularity of the venue soared after nine IPL matches were held here and also the first One-Day between India and England on January 27, 2014. In the last Indian Premier League (IPL) season, Dharamsala was not allotted a single match owing to the tussle between the Congress-led state government and the HPCA.

The stadium first figured on the international cricket map in 2005 when it hosted a warm-up tie between the touring Pakistan team and the Indian Board President’s XI. The HPCA venue, located at an altitude of 4,000 feet above sea level, is the first in India to use winter rye grass scattered around the outfield, which prevents the grass from dying when temperatures fall below 10 degrees Celsius. 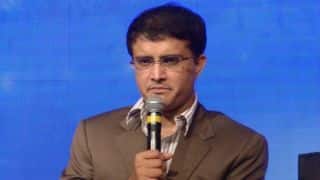