The mammoth loss to India may not have hurt England's Super Eight chances in the World Twenty20 but skipper Stuart Broad said it did highlight some clear flaws in his batsmen's handling of spinners. 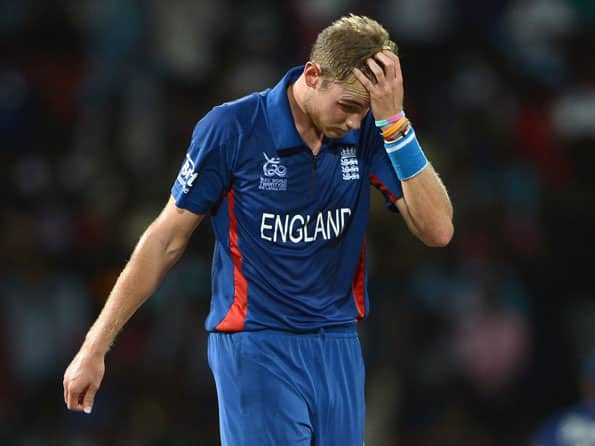 The mammoth loss to India may not have hurt England’s Super Eight chances in the World Twenty20 but skipper Stuart Broad said it did highlight some clear flaws in his batsmen’s handling of spinners.

“We made it easy for India in the end. We will have to learn from our mistakes and there were some pretty clear ones in the batting line-up. Young guys seem to learn pretty quickly,” Broad told reporters after England were outplayed by 90 runs last night.

England were dismissed for 80 in 14.4 overs, making it their lowest total in Twenty20 internationals. Broad said the enormity of loss doesn’t matter to him much as it has no bearing on England’s overall fortunes in the tournament.

“It doesn’t change our destiny a huge amount – we still hop on a bus to Kandy in the morning. It is not like tomorrow is going to be a different day. It is not as if we have to go home or anything,” Broad said.

Reflecting on the team’s performance, Broad said, “Our error is we lost early wickets.”

“Spinners always enjoy bowling to new batsmen. We talked the other day about how we need to hit straight and hard and today to lose the first couple of wickets across the line was a bit disappointing. Hitting straight was a much better option than going across the ball.”

“The guys getting out said it was just skidding on a little bit. There was a little bit of turn, Harbhajan (Singh) bowled very nicely with his top-spinner going well but no, I don’t think it was a raging turner or anything.”

Broad said his players’ performance was not upto the mark.

“I think we were a little bit sloppy in places: we had a few soft twos in the outfield,” Broad conceded.

“We didn’t hit our lengths as well as we could up front.

But I think it was the lowest first-innings score on this ground so far in the tournament.

“We thought it was very chaseable. The wicket was pretty flat, although it didn’t have the pace in it that it had the other night.” (PTI)