Following their emphatic 4-1 series win over India, England have replaced New Zealand at the fourth spot in the latest ICC Test rankings for teams.

Following their emphatic 4-1 series win over India, England have replaced New Zealand at the fourth spot in the latest ICC Test rankings for teams. At The Oval on Tuesday, England sealed a 118-run win on the fifth and final day of the fifth Test.

England began the series at fifth spot with 97 points but outclassing India, the top-ranked Test team, helped them to 105 points – a gain of eight points which is three more than New Zealand’s 102 who have now been pushed down to the fifth position.

Chasing 464, India’s hopes of an unlikely win were raised when opener KL Rahul and young wicketkeeper-batsman Rishabh Pant built 204-run stand for the sixth wicket. Each of them went on to score a century. However, Adil Rashid produced a ripper to clean up Rahul on 149 and soon Rishabh Pant holed out for 114. India eventually folded for 345 with James Anderson taking the last India wicket to fall to surpass Glenn Mcgrath as the pacer with most Test wickets.

Though India continue to sit at the top, a 1-4 defeat has resulted in them losing 10 points. With 115 points, they are now just six points ahead of second-placed South Africa and Australia who are third.

India’s next Test series is scheduled at home when they host West Indies for a two-match series next month. During the same period, England will travel to Sri Lanka for a three-Test series. 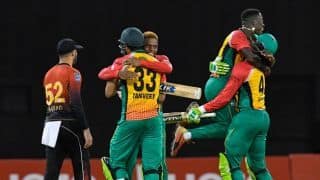