South African fast bowler Kagiso Rabada, already facing a ban for the remaining two Tests against Australia, was on Monday hit with a new charge in the latest incident of a bad-tempered series. The ICC announced that Rabada had been charged with a level one offence following a send-off of David Warner after he bowled the Australian batsman on the third day of the second Test at St George s Park on Sunday.

Rabada attended a hearing convened by match referee Jeff Crowe on Sunday regarding a level two charge for making shoulder contact with Steven Smith after dismissing the Australian captain on the first day. Level one offences can incur a fine up to 50 percent of a players match fee and one or two demerit points, while a player can be fined up to his full match fee and get three or four demerit points for level two offences.

The result of Sunday s hearing is expected to be announced later on Monday. If found guilty Rabada could be banned for two Tests because of demerit points that he already has on his record. Warner himself was involved in an altercation with South African wicketkeeper Quinton de Kock during the first Test. 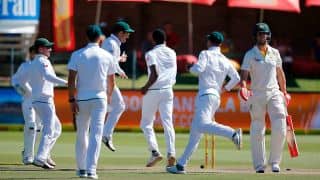