Ireland replaces Australia in Group D and will play its matches against India, Nepal and New Zealand

International Cricket Council confirms entry of Ireland in Group D of ICC U-19 tournament when the went on twitter to announce of the entry and will play against Nepal, India and New Zealand, as Australia opted out due to security threats. The tweet read, “Ireland replaces Australia in Group D and will play its matches against India, Nepal and New Zealand #u19cwc” Earlier ICC had invited Ireland for U-19 tournament and exuded that they will be given enough safety at Bangladesh. The U-19 which is scheduled January 27 to February 14. The ICC said its own security manager and an independent security agency had been working closely with the Bangladesh Cricket Board (BCB) and the Bangladesh security agencies, and that the planned security arrangements were satisfactory. ALSO READ: Ireland to replace Australia in ICC U-19 World Cup

“Whilst the ICC notes and respects the position of Cricket Australia, which we understand is based on advice received from the Australian Government, we are obviously disappointed with the decision,” said International Cricket Council CEO David Richardson. “The ICC takes its responsibilities around the safety and security of ICC events extremely seriously. “And taking into consideration the full and unequivocal support of Bangladesh government that has been afforded to us at the highest level and through all local security agencies, the advice we have received from our own and independent security experts, and the robust security plan that has been developed, the ICC remains of the view the it is appropriate for event planning to continue as scheduled,” he added. ALSO READ: 2015 Yearender: Ireland have bright path ahead as they keep on developing as a unit

Richardson said ICC will continue to monitor the situation in Bangladesh. “Naturally, as part of that planning process, the ICC’s own security team, supported by an independent security agency, will continue to monitor closely the situation in Bangladesh, including all travel advisories provided by relevant government agencies,” he said. “Security plans associated with an event of this size and stature are always subject to continual review to ensure that they remain appropriate and fit for purpose, and this event is no different. “The ICC U19 Cricket World Cup is an extremely important event on the ICC calendar. We remain confident that the ICC, in conjunction with the BCB, will be able to successfully deliver this event in Bangladesh,” he added.

Ireland replaces Australia in Group D and will play its matches against India, Nepal and New Zealand #u19cwc

The ICC World Twenty20 2016 tournament is to be held in India from March 8 until April 3. 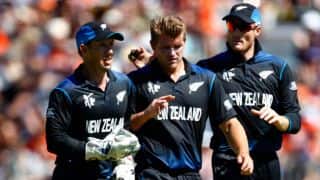