England and the West Indies advanced to the quarter-finals of the ICC U-19 World Cup 2014 when they comfortably won their decisive Group C and D matches respectively on Tuesday.

Tuesday’s results mean that from Group C, South Africa and West Indies have progressed to the Super League quarter-finals while Canada and Zimbabwe will feature in the Plate Championship and from Group D, Sri Lanka and England will appear in the Super League quarter-finals while New Zealand and the UAE will play in the Plate Championship.

The feature of Tuesday’s matches were magnificent unbeaten centuries from South Africa captain Aiden Markram (120 not out) and Sri Lanka opener Hashan Dumindu (113 not out), while South Africa’s Yaseen Valli also maintained his excellent batting form with 53 not out against Zimbabwe.

Brett Randell was one of the star bowlers of the day when he returned figures of three for 57, but ended up on the losing side as England defeated New Zealand by 115 runs.

England was extremely severe in the last 10 overs which yielded 100 runs, including 57 off the final five 5 overs.

In its chase, New Zealand was rocked by fast bowlers Matthew Fisher and Jack Winslade, and spinners Rob Sayer and Rob Jones as it was bundled out for 114 in 36.1 overs.

Fisher was the pick of England bowlers when he finished with three for 18, while Winslade picked up wickets off successive deliveries to end up with two for 23. Sayer, with his off-spinners, bagged two for 21 and wrist-spinner Jones claimed two for 33.

Markram was in a punishing mood as he clobbered 13 fours and a six in his 120 not out as South Africa achieved a modest 199-run target in 39 overs to beat Zimbabwe by seven wickets. 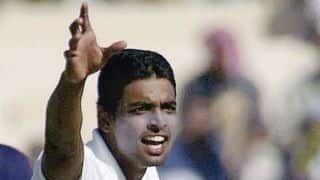