Defeating Sri Lanka by 32 runs (Duckworth-Lewis method), Afghanistan qualified for the quarter-final. Despite losing as early wicket, Ibrahim Zadran (86), Ikram Ali Khil (55), Darwish Rasooli (63) shone to provide Afghanistan with a competitive score of 284 for 7. Thisaru Rahsmika and Nipun Malinga bagged a couple of wickets each to emerge as the pick of the bowlers for Sri Lanka.

Rain interrupted the match for quite some time and the reduced target was 235 from 38 overs. However, Afghanistan’s bowling was better. Naveen-ul-Haq led the attack with his 4 for 35 while Azmatullah Omarzai and Qais Ahmad bagged two wickets each. Jehan Daniel top scored with a 48 as Sri Lanka were bundled for 202 in 37.3 overs.

Jakob Bhula’s record-breaking innings of 180 paired with Rachin Ravindra (117) handed New Zealand a comprehensive 243-run victory in the second match. The openers notched up a gigantic partnership and the bowlers then followed the performance with a commendable bowling performance to restrict opponents Kenya at 194 for 4. Bhula’s 180 is now the highest individual total in Under-19 ODIs and the batsman stole the show entirely, later being adjudged the Player of the Match.

Australia posted thrashed Zimbabwe to register their first victory in the tournament. Winning the toss, Australia put Zimbabwe to bat. Xavier Bartlett led the bowling attack with his 3 for 20 and helped his side bowl out Zimbabwe for 134. Robert Chimhinya was the highest scorer of the side with his 27.

Australia lost only 3 wickets in the chase to get to the runs in 18.2 overs. Both openers approached aggressively; Max Bryant scored 44 off 27 while Jack Edwards got 40 off 20. Though Zimbabwe bowlers tasted some success, they failed to defend the low total.

South Africa outwitted West Indies with all-round performance, registering their consecutive win in the tournament. Despite a slow start, a steady knock of run-a-ball 99 from Wandile Makwetu and a 18-ball 29 from Gerald Coetzee took their team’s score to 282 for 8 at the end of innings. Jiveshan Pillay was given a controversial obstructing the field dismissal during the innings. The entire West Indies bowling contingent put forward team effort to restrict the runrate till the mid overs but South Africa increased it post the 40th over.

West Indies’ batting could not match that of South Africa’s. Coetzee looked accurate and in control of his impressive pace, bagging 2 wickets while Hermann Rolfes was the pick of the bowlers with his 4 for 33. They bowled out West Indies for 206 and won the match by 76 runs, with 27 balls to spare. Though all eyes were on Makhaya Ntini’s son Tendo, he could not put forward any extraordinary show, bagging just one wicket with an economy of 6.50. 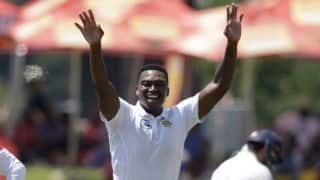 India vs South Africa, 2nd Test, the match has been a quick turnaround for me, admits Lungi Ngidi 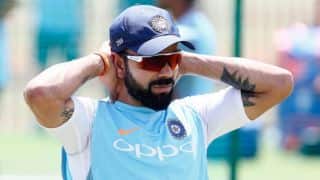