16 years ago Australia had secured the highest margin victory against Kenya around the same time in New Zealand itself.

Australia secured a thumping victory over Papua New Guinea (PNG) by a massive margin of 312 runs at Lincoln No. 3 in Match 19 of 2018 U-19 World Cup. Interestingly, 16 years ago, Australia had secured the highest margin victory against Kenya around the same time in New Zealand itself. Nathan McSweeney starred with his 111-ball 156 that was decorated with 18 fours and 4 sixes while Jason Ralston defended the total with his 7-wicket haul.

Put to bat, Australia brought up a grand total of 370 on the board. Apart from McSweeney s century, skipper Jason Sangha and Param Uppal also notched up fifties in the middle to keep Australia afloat. Sangha and McSweeney s 250-run stand tormented the PNG bowlers until James Tau removed the settled batsmen off consecutive deliveries. However, Tau missed a hat-trick opportunity thereafter. Austin Waugh and Param Uppal then steadied the ship with their 92-run stand. Daure Aiga kept PNG in the game with consecutive wickets of Waugh and Uppal. He, however, missed his hat-trick as well.

Chasing 371, PNG batsmen fell like a pack of cards. Leke Morea was the top-scorer for the side with 42-ball 20. The remaining batsmen perished for single digits. Ralston romped through the top-order and lower-order to finish the task for Australia within 25 overs. He ended up with best bowling figures going past Jeevan Mendis and Trent Boult’s figures of 7 for 19 and 7 for 20 respectively.

With this win Australia are through to the quarter-finals while PNG have a chance to flourish in the plate stage.

Man of the Match: Nathan McSweeney

Given a target of 189 to chase, Pakistan s innings was a start-stop one. Thisaru Rashmika got the better of them cleaning the top-order. It was Zaryab and Mohammad Taha who helped resurrect the Pakistan innings with their 61-run stand. In the middle, Zaryab was playing a lone battle as he lost his partners in succession. However, skipper Mohammad Hasan Khan and Zaryab tried to revive the innings. Mohammad Musa, too, played a crucial role with his heroics in the lower-order.

Earlier, Suleman Shafqat and Shaheen Afridi s combined efforts restricted Sri Lanka to 188 in 48.2 overs. Jehan Daniel was the only one to notch up a fifty after the top-order and middle-order stuttered. Ashen Bandara and Daniel were brought up a 76-run stand to help them to some respectability.

Man of the Match: Ali Zaryab 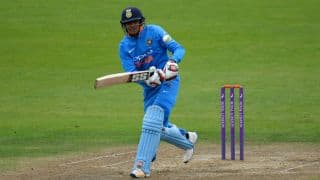