England Under 19 team has struggled for form in recent times.

The England and Wales Cricket Board (ECB) have announced England Under-19 squad for ICC Under-19 World Cup to be played in UAE during next month. The squad will be captained by Yorkshire’s young pacer, Will Rhodes. England haven’t performed well in recent times.

They will start their campaign against the hosts, UAE on February 14. Next up, they will play Sri Lanka and New Zealand in the group stages of the tournament as reported by ICC-Cricket.com.

Head selector of England Development Programme, David Graveney said, “This squad contains an exciting mix of young talent which we look forward to seeing perform on the world stage against top class opposition. It will be an excellent experience for these young players to develop their games in a world class environment, competing at the highest level in this prestigious tournament.” 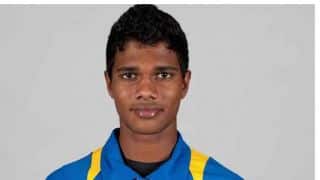