India have romped home to a thumping 245-run victory over Papua New Guinea at the ICC Under-19 World Cup 2014. This puts India on top in Group A and they will face England Under-19 in the quarter-final at Dubai on Saturday.

After an innings that saw India sail to 301, they put Papua New Guinea on the backfoot immediately. Monu Kumar snared two in his second over as both batsmen were bowled, but he missed out on a hat-trick.

There was some resistance for the third wicket, but once Aamir Gani and Kuldeep Yadav came on to bowl, it was all too easy. There was no way PNG would have found a way back. Finding it tough against the spin, they were completely bamboozled and then from 52 for four, they collapsed to xx all-out. That in many ways sums up PNG’s fate.

Deepak Hooda also shared the honours with Yadav and Gani.

Earlier, Sanju Samson’s brilliant innings of 85 off 48 balls propelled India to 301 for six. Samson’s innings made a huge difference as India were moving gradually for a major part of the innings.

As the Indian batsmen searched for a good outing in the middle, skipper Vijay Zol won the toss and chose to bat first. It was a good chance for the batsmen to get back into their groove with a much sterner and superior test awaiting them in the quarter-final.

Akhil Herwadkar and Ankush Bains started off cautiously before the former started taking the attack to the opposition. He was also helped by the dropped chance early as the point fielder dropped a sitter. Herwadkar was then ready to lost it and also smashed a six over fine-leg. However, when he tried to go over the top again, he was caught at square-leg off Sakvai Gebai’s bowling.

Bains and Zol calmly went about the job. They were slow initially, and picked up pace later, although they were only working the strike around. For a major part, the innings hovered around the run-rate of four an over. Zol was ultimately bowled while trying to smash one over the top. He had scored 35 off 68 balls.

Meanwhile, Bains got to his half-century quite comfortably and then decided to charge. However, he got a top-edge and was caught for 59. At that stage, 139 for three in the 33rd over. That is when Samson and Shreyas Iyer came together.

After a few quiet overs, Samson started smashing it. The off-side was laced with attacking strokes. Off the 40th over, he smashed 23 runs. There were four fours and a massive six. He moved to his fifty off 32 balls and then merely continued the carnage. He was of course helped by a few dropped catches through the latter half of his innings.

Ultimately, Iyer and Samson;s stand came to an end, but by then, they had put India on course to a good total. Sarfaraz Khan came in and hit a few boundaries to ensure India get to 301. 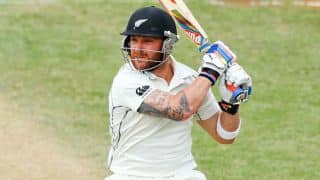 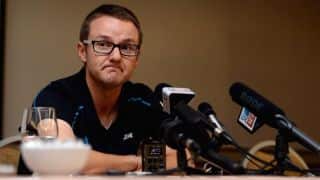