After a 5-wicket-haul in the match against Papua New Guinea, Anukul Roy maintained consistency, bagging 4 wickets in India's match against Zimbabwe in the ICC Under-19 World Cup 2018.

After a 5-wicket-haul in the match against Papua New Guinea, Anukul Roy maintained consistency, bagging 4 wickets in India‘s match against Zimbabwe in the ICC Under-19 World Cup 2018. At the Bay Oval, Mount Maunganui on Friday, Zimbabwe elected to bat, avoiding any scope of giving India a chance to score a mammoth. However, their batting faltered yet again, as they were bowled out for 154 (their highest score in this edition of the tournament). Apart from Roy, Abhishek Sharma also shone with the ball. However, one of his dismissals was controversial.

As usual, Kamlesh Nagarkoti and Shivam Mavi opened bowling for India, and Mavi got India their first breakthrough in the third over of the match removing Gregory Dollar for 4. Though he bowled exceptionally throughout, maintaining an average below 5, Dollar’s was his only wicket in the match.

Wesley Madhevere, who has been Zimbabwe’s best performer in the tournament, tried building a partnership at this stage. But his partner Dion Myers was undone by Arshdeep Singh soon after for 10. Madhever himself got bowled sometime later, off a Riyan Parag delivery outside off-stump that he edged to the stumps.

Zimbabwe kept losing wickets at regular intervals. Milton Shumba applied himself but could not survive long. His 36 was the highest score in the Zimbabwe camp. Anukul Roy was introduced and he ran through the middle order, removing Shumba, skipper Liam Roche (31) and Robert Chimhinya (0).

However, the lower order added their bit, taking Zimbabwe past their best score in the tournament. Tinashe Nenhunzi looked to bat with the tail, getting a decent start with 14 runs but was soon dismissed by Abhishek Sharma. Abhishek’s second wicket remained a bit controversial as the replay showed Nenhunzi had gloved the ball before it hit him on his pad.

Zimbabwe went past 150 but could not survive full 50 overs. Nkosilathi Nungu, after being hit in the head by Arshdeep’s bouncer a few overs back, was bowled by Roy for 2, ending Zimbabwe’s innings. 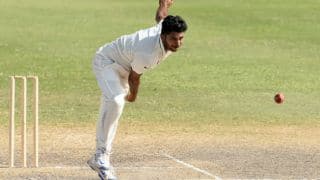