India will seek to defend the ICC U-19 Cricket World Cup title.

Future stars will get a chance to show their talent, potential and prowess when the ICC U-19 Cricket World Cup gets underway across the United Arab Emirates (UAE) on Friday.

On the opening day, four matches will be played with 1998 champion England taking on the UAE at Zayed Cricket Stadium here, Zimbabwe facing Canada at Abu Dhabi Oval 1, New Zealand squaring off against Sri Lanka at Sharjah Cricket Stadium, and South Africa and the West Indies going head to head at the Dubai International Cricket Stadium.

India will seek to defend the ICC U-19 Cricket World Cup title in a 16-day tournament in which 48 matches will be played. India has also previously won the crown under Mohammad Kaif in 2000 and Virat Kohli in 2008, but unlike Pakistan, its opponent in Saturday’s match at the Dubai International Cricket Stadium, it has never won back-to-back titles.

India seems to have strong credentials in this event as only a month ago in the UAE, it won the U-19 Asia Cup when it defeated Pakistan in the final.

Last year in July, it also won the Top End U-19 tri-series, which featured Australia and New Zealand, and beat Sri Lanka in August in a bilateral series as well as winning the U-19 quadrangular series, which also involved South Africa, Australia and Zimbabwe.

However, the final build-up for India has been far from ideal as it lost both its warm-up matches to Sri Lanka (by five wickets) and South Africa (five wickets).

Previewing the tournament and his side’s match against Pakistan, India captain Vijay Zol said, “We are confident about our chances in the tournament. We have won in the past and also the recently concluded Asia Cup. So, we are carrying the momentum with us. Everybody is in good nick and working hard, and we are looking forward to playing in the tournament.

“Pakistan is a good team. They have been doing well on the U-19 circuit, but we have managed to beat them. Recently, we beat them in Asia Cup final that was also played here in the UAE. We are very confident about playing against them,” he said. 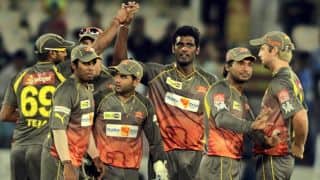