Gilhota feels he is being made a scapegoat.

New Delhi: Karan Gilhotra, against whom the International Cricket Council (ICC) has issued an advisory to the Board of Control for Cricket in India (BCCI) Secretary asking him to stay away from suspected bookies, on Monday accused the global cricket body of trying to “malign” Anurag Thakur‘s image by using him. Gilhotra is at the centre of a storm after the ICC on Sunday issued an advisory to Thakur, who was seen photographed with the businessman in Chandigarh. Read: N Srinivasan’s ICC informs BCCI about Anurag Thakur meeting alleged bookie

“Why doesn’t the media ask the ICC if they have put me on watch list then they obviously have something to share, why don’t they share it. Just because they want to malign Mr Thakur and want to use me for that for their own reasons which are best known to them,” he told NDTV. Read: Who is Karan Gilhotra?

The internal feud within the BCCI on Sunday took an ugly turn today with Thakur launching a stinging attack on ICC Chairman N Srinivasan, saying that he should actually share information on bookies with his own family members “whose involvement in betting has been proved”. Thakur yesterday hit back at Srinivasan through an open letter in which he questioned the timing of the “counter offensive” initiated at the behest of the ICC Chairman. Read: Anurag Thakur asks N Srinivasan to share list of bookies with his family members as well

Reports had said that BCCI was sent a letter by the ICC about Thakur being seen with an alleged bookie Gilhotra in Chandigarh. Gilhotra urged the ICC to share the evidences if they have any.

“I socialise with celebrities, cricketers. I am friends with some of them. Like Mr Anurag Thakur, I have other friends in the cricket fraternity. If that indicate my wrongdoing then I would request the ICC, if they have put me in the watch list, to at least share the evidences, whatever suspicions, possibilities they have before they tarnish the image of an individual,” Gilhotra said. Asked if he was being made a scapegoat, Gilhotra said “of course”. 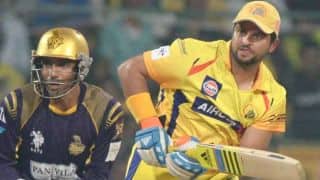 Dwayne Smith, Suresh Raina get out, KKR getting back in the game against CSK in IPL 2015