London: Former skipper Anjum Chopra believes India have a 50-50 chance of defeating Australia in Thursday’s semi-final of the ongoing ICC Women’s World Cup. “Yes, I think India can beat Australia,” Chopra was quoted as saying by ESPNcricinfo. “When I say that, I am not just being hopeful that India should be in a final. The reason I say that is, I’ve always felt that anytime you get into a quarter-final or a semi-final, there’s always one match that as a team you need to play well together, even if they are the current world champions.” Australia, the defending champions, have won six of the 10 World Cup tournaments prior to the ongoing edition and hold an overwhelming 34-8 win-loss record against India in ODIs. ICC Women s World Cup 2017 final to end with capacity crowd

“Definitely they are a beatable side. Yes they have been world champions often, so they’ve seen themselves as an Australian team in this situation many more times than the Indian team. So yes, the confidence is there, they know how to come to this stage and how to conquer this stage, which will apparently be missing in the Indian line-up,” said Chopra, who is currently officiating as a commentator at the ongoing World Cup. The Mithali Raj-led side won five out of its seven group stage matches while Australia won six.

They got off to a sensational start in the tournament, winning four matches in a row, including a surprise 35-run win against hosts England in their opening game. However, their winning streak was brought to an end by South Africa, who defeated them by 115 runs. The Meg Lanning-led side added to India’s woes by crushing them by eight wickets in their next game. WWC17: Former cricketers back India to grow stronger further

In what was a virtual quarter-final against New Zealand, Indian eves bounced back to register a massive 186-run win and enter the semis. Australia, on the other hand, have lived up to the expectations of being title favourites. They defeated South Africa by 59 runs in their previous game, without their skipper Lanning. Chopra, who was a member of the team that reached the final in 2005, losing to Australia by 98 runs in Centurion, was elated to see the positive response which Raj and her team have been getting in India.

“It is wonderful to see the response back home,” she said. “I have to confess I never expected it. I knew it would be a very big coverage before the start of the World Cup or before the build-up but the way the response has come about, I think it is phenomenal. The reason is the Indian team is winning and also that the men aren’t playing a series presently!” WWC17: Match Officials for semi-final stage announced

“Even the men’s cricketers, their support coming in the form of tweets, with encouraging words to the players, it has been phenomenal,” she added. The winner of the second semifinal will face hosts England, who defeated South Africa to advance into final. The summit clash will be played at the iconic Lord’s on July 23. Yasir Shah: Everyone in Pakistan cricket will miss Misbah-ul-Haq 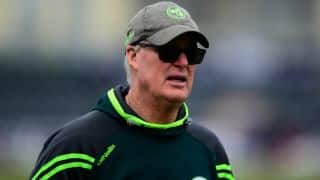