For England, only Sarah Taylor and Natalie Sciver stood tall as Jhulan Goswami ran through the middle-order.

Things finally got under way at the ICC Women’s World Cup 2017 final as England and India stepped on Lord’s. Winning the toss, Heather Knight chose to bat on a wonderful Sunday afternoon. Undeterred by the occasion, it was Women ODI’s leading wicket-taker Jhulan Goswami who pulled off a memorable show for her side. Her 3 for 23 hacked the hosts’ hope of a massive total. For England, only Sarah Taylor and Natalie Sciver stood tall, ensuring their side did not face complete disarmament. The pair added 83 runs for the fourth wicket before Jhulan decided to turn the table on its head.

England’s tail provided resistance taking them to a respectable total of 228 for 7. In other words, India need 229 to win their maiden Women’s World Cup. Openers Tammy Beaumont and Lauren Winfield took charge from the word go and capitalised on a nervous Indian bowling. They respected the bowlers when needed, but latched on to anything that was unworthy of their regard.

Amidst all this, Tammy moved her way past the 400-run mark in this World Cup. With hardly anything for the pace bowler on offer, Mithali Raj called on Rajeshwari Gayakwad in the 8th over. Sadly for India, Lauren took a liking for Rajeshwari and smacked her for 3 fours in the latter’s first over.

Jhulan did manage to get Lauren leg-before but the decision was overturned thanks to DRS: the ball was drifting down leg. On the other hand, Lauren was lucky to be dropped by 19 by Sushma Verma.

Rajeshwari managed to have the final laugh against Lauren after she bowled her round her leg. Lauren, trying to sweep, missed the ball completely to fall for a 35-ball 24. Sarah came out at No. 3. The well-set Tammy threw her wicket away after mishitting a juicy full-toss straight into the bucket-like hands of Jhulan off Poonam Yadav.

Heather came out to settle things down in the middle along with Sarah but lasted just 7 balls. She was nabbed by Poonam plumb in front of the wicket for 1.

England’s most consistent batter Natalie was unfazed by the moment. She continued to score freely and kept the scoreboard moving. Along with Sarah, Natalie took England score past the 100-run mark as rain started to make its presence felt. They added 50 runs in merely 65 balls.

After a long wait, India broke the 83-run stand between Sarah and Natalie. Sarah played a loose shot to give wicketkeeper Sushma Verma a simple catch off Jhulan. She ended up making 45 in 62 balls. Jhulan then trapped Fran Wilson leg-before for a first-ball duck to bring India straight into the match.

Meanwhile, Natalie reached her third fifty in this edition in 65 balls; 9th overall. Jhulan got her in the nick of time. Nataline, playing across the line, missed the ball and was found leg-before for a valiant 51. Katherine Brunt and Jenny Gunn survived a probing spell by Indian bowlers. Katherine, in particular, took on charge and played fearless cricket against Deepti, Poonam and co.

Deepti’s bullet-like throw brought an end to a gallant 32-run stand between Katherine and Jenny. The former was then found miles away from the crease; she made 34 off 42.

Both sides remained unchanged from their semi-final games against South Africa and Australia. 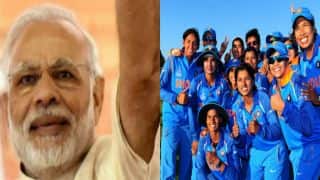 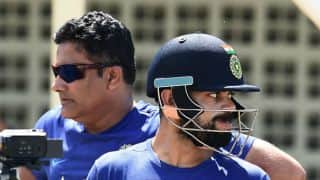