The India skipper got to the landmark by punching Australia's Ellyse Perry to the covers in their ongoing ICC Women's World Cup group match at Bristol on Wednesday.

Congratulations @M_Raj03 for becoming the highest ever run scorer in the history of women’s ODI cricket.We are proud of u #WomensWorldCup

“Congratulations @M_Raj03 for becoming the highest ever run scorer in the history of women’s ODI cricket.We are proud of u,” Mamata tweeted. The India skipper got to the landmark by punching Australia’s Ellyse Perry to the covers in their ongoing ICC Women’s World Cup group match at Bristol on Wednesday. Mithali broke another record when she became the first player in the women’s game to notch 6000 ODI runs when she launched leg-spinner Kristen Beams over long on for a big six.

Others cricketers too wished Mithali on her historic feat:

Congratulations Mithali Raj for becoming the leading run-getter in ODIs. We are proud of you. @M_Raj03 @BCCIWomen

Meanwhile, former captain and COA member Diana Edulji today congratulated current India skipper Mithali Raj on becoming the highest run-getter in women’s ODI cricket, saying she is among the best the country has ever produced. “It is a landmark day for India’s women’s cricket. First Jhulan Goswami became the leading wicket-taker in ODIs, now Mithali has broken Charlotte Edwards’ record. It also shows that our women’s game is on the up,” Edulji told PTI.

Mithali achieved the feat while batting against Australia in the Women’s World Cup on Wednesday. While Mithali’s ODI average is remarkably over 50, she has got some flak for her performance in the T20 format. Edulji sees 34-year-old Mithali playing for another year before calling it a day. “She has already said that it is going to be her last World Cup. Like Jhulan, she is also in the twilight of her career. I see her playing for at least another year,” Edulji added.

Later, Telangana Chief Minister K Chandrasekhar Rao congratulated Indian women s cricket team skipper Mithali Raj on creating a world record by becoming the first player to cross 6,000 runs in the history of women s ODI. Rao, who sent a congratulatory message to Raj, said she made the country proud with her achievement, a release from his office said. Rao wished that the Indian women s cricket team achieve greater heights under the leadership of Raj, reported PTI. 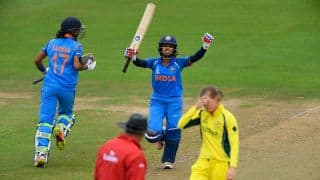 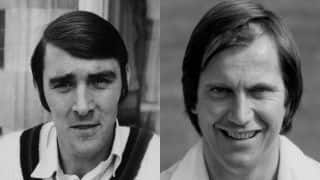