While New Zealand hope to get off to a strong start, Sri Lanka would want to recreate the 2013 magic.

In a tournament that is ruled by England Women and Australia Women, New Zealand Women are the only team to have earned a World Cup title as well. This year White Ferns will begin their ICC Women s World Cup 2017 campaign against Sri Lanka Women in Bristol. Skipper Suzie Bates, who has led the side in 2009 and 2013 World Cup s, enter this tournament along with three other players who remain constant from 2009 World Cup. Sri Lanka Women, on the other hand, have only one positive to take away from World Cup – beating India and England to gain the fifth position four years ago. While New Zealand hope to get off to a strong start, Sri Lanka would want to recreate the 2013 magic.

The third-ranked New Zealand side started their World Cup journey with a mixed performance in the warm-ups. Where they comfortably won against India, the home side got the better of White Ferns. However, New Zealand are coming to the World Cup with a strong squad. Suzie was awarded ICC ODI Player of the Year last year. Supporting her will be comeback player Sophie Devine. Sophie was the star of Big Bash League (BBL) smashing century for Adelaide Strikers. However, a thumb injury during BBL kept her away from the Australia series. Amy Satterthwaite is another player to watch out for with 2,970 runs at 37.59.

She scored four consecutive boundaries last year to equal the record with Sri Lankan veteran Kumar Sangakkara. Amy has been the lynchpin of New Zealand batting and Suzie can rely on her with a bit of spin as well. However, the focus will be on 16-year-old Amelia Kerr who is skipping her high school purely for World Cup. Amelia, who made her debut last year, has already 10 wickets to her name from 7 ODIs at an economy rate of 3.89. She played a crucial role against Australia claiming best figures of 4 for 42, also claiming the prized scalpof Meg Lanning and likes.

New Zealand s pace-attack is also in place with newbie like Lea Tahuhu and Holly Huddleston handling the initial overs. Suzie can also seek Anna Peterson and Erin Birmingham s help to bolster the pace-attack. Most of the players from the squad have also tasted the England conditions, courtesy county cricket.

Sri Lanka enter the World Cup tournament with an experienced lot. A total of 9 from the15 members in the squad have been part of the 2013 World Cup campaign. After a successful campaign in the World Cup Qualifiers finishing third, the selectors have persisted with the Inoka Ranaweera as the captain of the side. With the return of former captain Shashikala Siriwardene as well after injury lay-off, Inoka could get some help. With the bat Chamari Atapattu will be lead the side. She was the leading run-scorer for her side with tally of 155 runs. Her consistency in the warm-ups could be witnessed as well.

Supporting her will be Nipuni Hansika, Prasadani Weerakkody and Dilani Manodara with the bat. Sri Lanka enter the campaign with four pacers. Udeshika Prabodhani, Eshani Lokusuriyage who guided Sri Lanka to victory against England in 2013 World Cup, Ama Kanchana the all-rounder and Sripali Weerakkody will be the go-to-bowlers for Inoka. With Shashikala s return to the spin department, who is the leading wicket-taker with 106 wickets and willbe seen along with Chandima Gunaratne and Chamari also another option handy.

World Cup journey for both sides

Where New Zealand have been part of all the 11 World Cup editions, Sri Lanka were part of the tournament since 1997. New Zealand have reached the finals four times and won only once. Out of the 74 World Cup matches they have played, New Zealand boasts of win-loss ratio of 48:23.

Sri Lanka, on the other hand, have managed only 7 wins in 28 matches. Their best remains from the previous edition where they finished at No. 5 in the Super Six stage.

Head-to-head record of both teams in World Cup: New Zealand clearly hold an upper-hand against with tally of 4-0 over Sri Lanka. 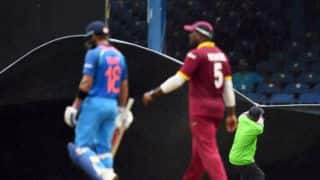