Australia on Friday got the better of West Indies by 28 runs in the second semifinal to set up a title clash against England in the final of the ICC Women's World Twenty20 . 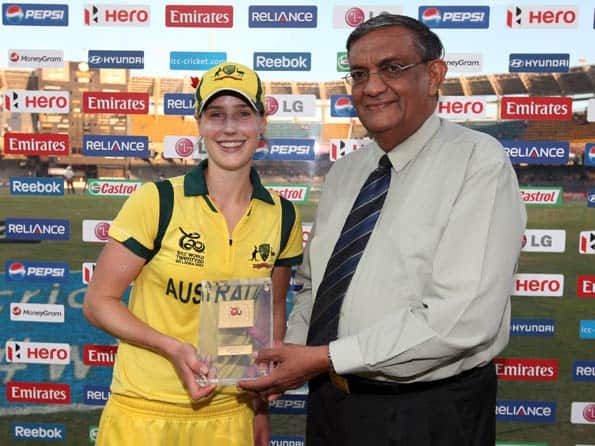 Australia on Friday got the better of West Indies by 28 runs in the second semifinal to set up a title clash against England in the final of the ICC Women’s World Twenty20.

Opting to bat at the R Premadasa Stadium, Australian women could only manage 115 for seven in their stipulated 20 overs. In reply, West Indies were shot out for a paltry 87 in 19.2 overs with medium Julie Hunter grabbing five for 22.

However, the woman-of-the-match award was given to seamer Ellyse Perry who removed the two best batswomen in the opposition line — Stefanie Taylor (3) and Deandra Dottin (6) — to finish with figures of 2 for 19.

Hunter bowled with lot of control as she repeatedly swung the ball both ways and Caribbean women didn’t have any clue.

A target of 116 in women’s cricket is pretty competitive and West Indies were never in hunt having lost the first four wickets for less than 30 runs on board.

Opener Juliana Nero (31) and Shanel Daley (25) though tried their best with a 48-run partnership for the fifth wicket but they were not able to get going and the asking rate kept creeping up only to make things even more difficult.

Credit should also be given to Lisa Sthalekar for her all-round performance.

After scoring 23 with the bat, she opened the bowling alongside Perry to keep the Windies under tight leash. Her four overs cost only six runs and the pressure started from there itself.

Earlier, Sthalekar and Alex Blackwell, who scored 21 were responsible for the Aussie women reaching a respectable total.

Rachel Haynes, who scored a quickfire 15 was the only batswoman to hit a six in the match where boundaries were shortened. (PTI)