Charlotte Edwards would expect a repeat of sterling performances from Lydia Greenway and Natalie Sciver.

Bengaluru: Riding high on a hat-trick of wins in the warm-up games, England Women will be looking to open their campaign in the ICC Women’s World Twenty20 on a high when they take on Bangladesh Women here tomorrow. England, who had been World T20 champions in the past, are on a roll, having thrashed New Zealand twice and South Africa once in the warm-up matches. In contrast, Bangladesh’s morale has taken a hit owing to a defeat against India in the opening match of the tournament which they lost by 72 runs here last evening. Full Cricket Scorecard: Bangladesh Women vs England Women, 4th T20 Match, Group B, ICC Womens T20 World Cup 2016

While Bangladesh have the advantage of knowing the playing conditions at the Chinnaswamy well, England will look to adapt as quickly as possible. One aspect in which the English would look to improve is the batting and the side would aim to post bigger totals on the board. The highest total they could during warm-ups was 131 for six against New Zealand. England, runners-up to Australia in the last two editions, would be banking on star batters Sarah Taylor and Tammy Beaumont. England Women in ICC World T20 2016: Balanced unit look to refine their flair in World T20

Beaumont and Taylor, who struck half-centuries in the warm-ups, will not only look to continue the good work. England skipper Charlotte Edwards would also expect a repeat of sterling performances from Lydia Greenway and Natalie Sciver. In the bowling department, Jenny Gunn has shown form with her medium-pace swing, claiming six wickets in three warm-up matches, with best figures being 4 for 12 against New Zealand. Katherine Brunt, recently hampered by a back problem, is one of the quickest bowlers in the women’s game and will spearhead England’s attack. India thrash Bangladesh by 72 runs in opening match of ICC Women’s T20 World Cup at Bengaluru

Edwards will also hope that seamer Anya Shrubsole, left- arm spinner Rebecca Grundy, Danielle Hazell and medium pacer Heather Knight, to give good support to Brunt, England’s strike bowler. On the other hand, Bangladesh would like to forget the last defeat against India and try to put up a good show to open their account in the points table by outsmarting the English side. However, it would not be easy for them as the likes of Brunt and company would like to test their fragile batting lineup. 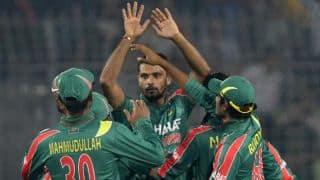