Sri Lanka scored 97 for 7 thanks to Siriwardene’s 33 off 31 balls, who later dished out figures of 2 for 10 from four overs to allow her side to defend the small total.

A clinical all-round performance from Shashikala Siriwardene helped Sri Lanka to register their first win of the ICC Women’s World T20 by beating Bangladesh by 25 runs at St. Lucia. Sri Lanka scored a modest total of 97 for 7 thanks to Siriwardene’s 33 off 31 balls and dished out figures of 2 for 10 from four overs which allowed her side to defend the small total.

Bangladesh folded for 72 which means that they have slumped to three losses which has ended their campaign, although they will have the opportunity to go out on a high when they face South Africa in their final group fixture.

After winning the toss and opting to bowl, Jahanara Alam struck first ball of the match, cleaning up opener Yasoda Mendis. Hasini Perera and Dilani Manodara staged a small recovery before both departed in quick succession. Siriwardene looked the most comfortable even as Bangladesh women continued to chip away. Nilakshi de Silva and Chamari Athapaththu gung around just about enough to ensure Siriwardene did not run out of partners. She batted till the very last over to get Sri Lanka close to the 100-run mark. Alam returned to snare Siriwardene and de Silva in the last over to keep the opponents under 100.

The second innings saw a contrasting performance from both teams. Sri Lanka women were top notch with the bat while Bangladesh batters continued to struggle in the tournament. Udeshika Prabodhani produced a stunning spell of 2 for 6 in 2.5 overs and skipper Athapaththu finished with 3 for 10. Bangladesh lost their first two wickets with nothing on the board, with Prabodhani removing opener Sanjida Islam out LBW first ball of the match, followed by the dismissal of No. 3 Fargana Hoque three deliveries later. The only little resistance that came was from Nigar Sultana’s 41-ball 20 with two boundaries as wickets continued to crumble.

Bangladesh batters entered a shell and were outplayed in their approach to scoring runs, which was evident by the fact that after 10 overs, the score read 28 for 4. Only three boundaries were hit during the innings, one of which was scored by Ritu Moni (13) at the lower order. Her dismissal off the final ball of the innings sealed the game for Sri Lanka. They stay alive in the tournament with three points from three matches. 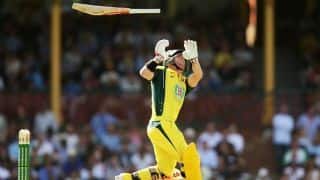