Australia cruised to an eight-wicket victory over England in the final of the ICC Women's World T20 in Antigua on Saturday.

All-rounder Ashleigh Gardner starred with bat and ball as Australia women cruised to an eight-wicket victory over England in the final of the ICC Women’s World T20 in Antigua on Saturday.

Gardner and teenage leg-spinner Georgia Wareham combined for five wickets to restrict the English to 105 all out off 19.4 overs after they had chosen to bat first at the Sir Vivian Richards Stadium.

Gardner then featured in an unbroken third-wicket partnership of 62 with her captain Meg Lanning as the Aussies reached the target with almost five overs to spare to lift their fourth World T20 crown.

Given her significant contributions in both innings, the 21-year-old was the obvious choice as “Player of the Match.”

The “Player of the Series” honour was also a predictable selection with opener and wicketkeeper Alyssa Healy taking the title although the final represented her least accomplished performance.

After winning three consecutive “Player of the Match” honours in Australia s group matches in Guyana, Healy dropped England top-scorer Danielle Wyatt in the third over of the final off seamer Ellyse Perry.

Wyatt contributed a breezy 43 off 37 balls to her team s effort but only England captain Heather Knight managed any other score of note in getting to 25 as wickets continued to tumble around her.

Gardner dismissed both Wyatt and Knight with her off-spinners and added the scalp of tailender Anya Shrubsole to finish with the impressive figures of three for 22. She was ably supported by Wareham, the 19-year-old accounting for Lauren Winfield and Sophia Dunkley off successive deliveries and conceding just 11 runs through three excellent overs.

Wareham also made amends for some surprisingly shoddy Australian outcricket by running out England s “Player of the Match” from the semi-final against India, Amy Jones, with a direct hit to the non-striker s end.

Any chance of England defending such a modest total depended on removing Healy cheaply. She was bowled by Ecclestone for 22 her lowest score of the tournament and although opening partner Beth Mooney departed shortly after, caught at the wicket off Danielle Hazell, Gardner and Lanning ensured the result was never in doubt.

Gardner finished unbeaten on 33 with Lanning not out on 28 as the captain sealed a successful campaign to reclaim the title they lost to the West Indies in Kolkata in 2016, taking a single off medium-pacer Natalie Sciver at the start of the 16th over.

“We did not have our best day in the field, but the bowlers did a good job,” said Lanning after receiving the championship trophy from West Indies batting legend and former captain Sir Vivian Richards.

“The last two World Cups really hurt and we had to change a few things and move it forward.”

Apart from the disappointment of losing to the Caribbean side in the previous Women s World T20 event, Australia also failed to reach the final of the Women s World Cup last year in England, which was won by the host nation who defeated India in the final at Lord’s. 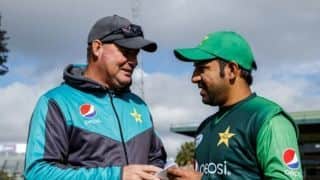