Harmanpreet Kaur struck a record-breaking century to power India to a record 194/5 against New Zealand in the ICC Women’s WT20 in Guyana on Friday. Harmanpreet belted 103 off 51, to become the first India women to record century in T20Is.

Her innings was loaded with seven fours and eight sixes.

It was her record-breaking 134-run partnership with Jemimah Rodrigues that helped India pile up the highest ever score in a Women’s WT20 match. Rodrigues, who came in to bat after Taniya Bhatia fell for 9 in the second over, scored 59 off 45.

India lost three wickets early after opting to bat in the WT20 opener. New Zealand pacer Lea Tahuhu got rid of the openers early. Bhatia started well with two fours but was beaten by pace to be bowled off the first delivery from Tahuhu. Smriti Mandhana then fell after a stunning catch from Hyley Jensen in the deep to hand Tahuhu her second wicket in as many overs. The wicket of debutant Daylan Hemalatha left India in a tricky spot at 40/3.

However, captain Harmanpreet and Jemimah then began the repair work collecting regular boundaries to negate the early advantage.

Harmanpreet was in dangerous mood as she began in ominous fashion, recording the first six of the tournament in the 10th over. India were 76/3 at the halfway stage but with Harmanpreet and Rodrigues settling in, they went on to plunder boundaries at will in the second-half of their innings.

India struck 118 from their final 10 overs with Harmanpreet being dismissed off the penultimate delivery. 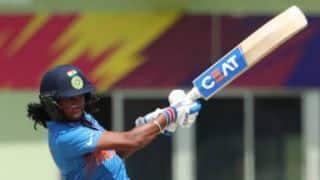