Afridi has made it clear he is always ready for challenges.

Pakistan all-rounder, Shahid Afridi has said that his team’s defeat against arch-rivals India in the semi-finals of World Cup 2011 at Mohali still haunted him and made him sad.

“We had played well until then and were just one step away from the final but it was a bad day for us and in the end we returned empty-handed. The defeat to India still haunts me and makes me sad,” said Afridi.

Afridi was captain of the one-day and Twenty20 teams in 2010 and 2011, but in May 2011 he had a fall out with head coach Waqar Younis during the tour of the West Indies, and as a disciplinary measure, the Pakistan Cricket Board had removed him as skipper. The decision to remove him from the top post was then considered a vastly unpopular one and it also led to Afridi announcing his premature retirement.

Afridi insisted that he had neither run after or was fascinated to become the captain of the national cricket team. “There is no doubt that being captain of the national team is a big honour but that does not mean I am running after it,” Afridi said. He further added, “Whether Misbah-ul-Haq is captain or anyone else I have and will always give my full support to them.”

His comments on the captaincy issue have come after controversy cropped up in Pakistan cricket circles and within the Pakistan board on whether Misbah or Afridi should lead the team in the next World Cup in 2015. Afridi has made it clear he is always ready for challenges and if the board ever asked him to lead the side again, he would give it serious consideration. He also said that World Cup 2015 in Australia and New Zealand offered a great opportunity for him and his teammates to undo what happened in 2011.

“If we work hard and play well as a unit, we can achieve the impossible,” he said. The all-rounder, who has restricted his career to ODIs and T20 matches, said he was pumped up for the World Cup and his focus would be on his form and training in the coming months. He admitted that he had become used to criticism over his performances. “When you play the way I do aggressively all the time, so you can expect praise and criticism. I have played in my own way for years now and am still doing it. Nothing has changed. I like to entertain people,” he insisted. 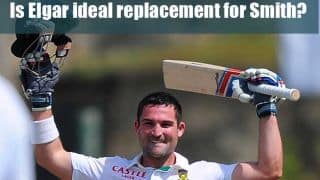 Is Dean Elgar a worthy successor to Graeme Smith?