This World Cup is the first time Afghanistan has qualified for the 50-over tournament.

Sydney: This month’s ICC Cricket World Cup 2015 is a dream opportunity for Afghanistan’s team who are hoping to change perceptions about their country, captain Mohammad Nabi said Saturday.

Ahead of his team’s first game against Bangladesh on February 18 in Canberra, Nabi said just talking about Afghanistan being in the tournament was a “big opportunity.” “For Afghanistan… to play the 50-over World Cup is our dream,” Nabi told reporters in Adelaide.

Nabi said that too often the news involving Afghanistan related to conflict. “If there is positive news like the cricket players of Afghanistan in the World Cup, it totally changes the minds back home and also in the world as well,” he said. “The meaning for the country to play in the 50-over World Cup is a big opportunity for cricket and also for the nation.”

This World Cup, jointly hosted by Australia and New Zealand, is the first time Afghanistan has qualified for the 50-over tournament.  The team qualified for the last two World Twenty20 tournaments in 2010 and 2012 but lost all their matches. Nabi said the team was hoping to do well against Bangladesh, who they beat in the Asia Cup last year. But their group also includes Australia, Sri Lanka, New Zealand and England and only four will progress to the knockout stages. 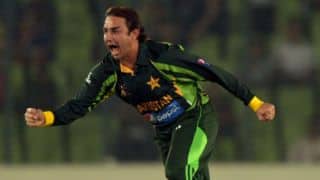