The ICC released the provisional squads of 12 teams for the next year's World Cup.

The International Cricket Council (ICC) today released the provisional squads of 12 teams for the next year’s World Cup in Australia and New Zealand. However co-hosts Australia and minnows Ireland have decided against releasing the names of the players in the provisional list although they have submitted the list of 30-members to the parent body within the stipulated deadline.

Sri Lankan legend Mahela Jayawardene and Pakistan’s flamboyant all-rounder Shahid Afridi are the two most experienced players going into the 2015 World Cup, which will be their fifth appearance in the global edition.

Both Jayawardene and Afridi, first played in World Cup during the 1999 edition in England and since then have appeared in all editions. While Jayawardene featured in the final of the ICC Cricket World Cup 2007 and 2011, as well as the semi-final of the ICC Cricket World Cup 2003, Shahid Afridi was a member of the Pakistan side that played the final at Lord’s in 1999.

He captained Pakistan at the ICC Cricket World Cup 2011 where Pakistan reached the semi-final. If the two players are named in the final line-ups, likely to be announced around 8 January 2015, then they will join the exclusive company of Wasim Akram, Shivnarine Chanderpaul, Aravinda de Silva, Inzamam-ul-Haq, Sanath Jayasuriya, Jacques Kallis, Imran Khan, Brian Lara, Muttiah Muralidaran, Thomas Odoyo, Ricky Ponting, Arjuna Ranatunga and Steve Tikolo, who have each played in five ICC Cricket World Cups to date.

Pakistan’s Javed Miandad and India’s Sachin Tendulkar, with six ICC Cricket World Cups each, share the record for the most appearances at ICC’s pinnacle event.

The United Arab Emirates (UAE), which is returning the ICC Cricket World Cup for the first time since 1996, has named the oldest and youngest players of the tournament in its 30-player provisional squad. Khurram Khan at 43 is the oldest players (born 21 June 1971) while Yodhin Punja, who turned 15 on 24 April 2014, is the youngest player. 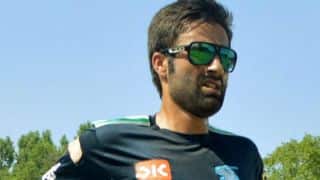