The contractual clash between West Indies board and players lead to abandoning of the India tour midway.

Former cricketer Brian Lara has expressed concerns that problems such as lack of unity could hamper the West Indies‘ preparedness for the upcoming ICC World Cup 2015.

The West Indies board announced its 30-man squad for the ICC World Cup 2015 to be held in Australia and New Zealand. The team is currently in South Africa for the test series and manager Richie Richardson assured that the troubles that plagued the team during India tour were no more there.

The contractual clash between West Indies board and players lead to abandoning of the India tour midway. The BCCI then asked for a sum of $42 million from the West Indies board to cover the losses it suffered.

Lara also hoped that big players like Chris Gayle, Dwayne Bravo, Kieron Pollard will be able to inspire the younger lot into playing as a unit.

“That’s where we need to improve and if we were to falter in the World Cup that’s where it will happen,” he said.

Lara also wished that the BCCI would be lenient in its demand of compensation, as the amounts will be a big burden on the already struggling West Indies Cricket Board (WICB). 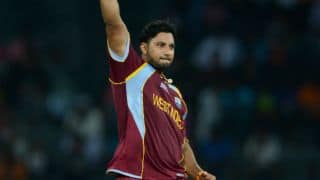