Richardson praised the city of Christchurch, which will be hosting the tournament opener.

ICC Chief Executive David Richardson has expressed satisfaction with preparations for next year’s ODI World Cup in Australia and New Zealand after receiving detailed updates in Melbourne and Wellington this week.

The briefings and presentations took place in the two host cities from August 25 to 27 followed by venue inspections in which the ICC and the Local Organising Committee (LOC) assessed the 14 tournament stadia and discussed a wide variety of logistical and operational matters with the local authorities.

In the three-day meetings, Richardson received updates on various aspects of event management, including match and non-match day venue operations, safety and security, ticketing and marketing, hospitality, status of construction work at various grounds, preparations being made by the host cities, media and broadcast operations, event legacy programmes, and PR and community engagement.

At the conclusion of the meetings, Richardson said: “The updates I have received from these meetings give us great confidence that we are on track to deliver a really memorable event. There is tremendous enthusiasm and anticipation among the LOC staff and no stone is being left unturned to ensure the teams, officials, sponsors and media are warmly received and enjoy a great experience during the ICC’s flagship ODI event. “For fans in Australia and New Zealand, this is once in a generation opportunity for them to see a galaxy of modern day stars battle out for the ultimate prize in cricket.”

Richardson had special words for the city of Christchurch, which is recovering from the devastating earthquakes of 2010 and 2011, and will be hosting three matches, including the tournament opener. “Christchurch is at the heart of sport activities in New Zealand. It has gone through some difficult times following the earthquakes but the city’s resilience and the developments at Hagley Oval are fantastic to see. We look forward to the return of international cricket to Christchurch for the opening match on 14 February.”

Richardson said the event had now entered the delivery phase and there was no room for complacency. “With 169 days remaining before the first ball is bowled and the final rounds of meetings and inspections having taken place, the focus is now on delivery. We understand how important World Cups are to the players and the fans and both the ICC and the LOC remain committed to ensuring the event lives up to its very high standards and expectations.”

The World Cup will start on February 14 with New Zealand taking on Sri Lanka in a day match in Christchurch, while on the same day in Melbourne, co-hosts Australia will go head to head with England. Melbourne will also host the final on 29 March. A total of 49 matches will be played across 14 venues, seven in Australia and seven in New Zealand. 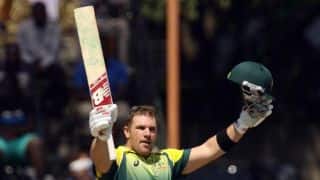