Morgan said that the talent in the squad is huge.

England‘s new ODI captain Eoin Morgan revealed the blueprint of the squad for World Cup triumph and has vowed to mould it into an aggressive team in his own image.

Claiming that they have made the changes to their method slowly, Morgan is determined to build on the team’s aggressive approach in Sri Lanka, but to add to the squad the composure that has been the hallmark of his career.

Morgan never believed that he would one day be leading England into a World Cup, eight years after experiencing his first with Ireland in the West Indies, the Mirror reported.

In his first public utterances as official one-day skipper, Morgan said that he believes England needs to be aggressive and they have been aggressive. He added that they have made the changes to their method slowly and saw glimpses of it in Sri Lanka and he believes that there would be a continuation of that method.

Morgan said that he would also like to see them be a bit more composed and calculated, claiming that they have seen it a couple of times in Sri Lanka when England posted good scores. He insisted that he would like to see more of that.

Morgan said that he has a very simple way of viewing things as a captain, claiming that he tends to stay quite flat and in a reasonable place to make decisions and that can influence players, particularly bowlers, when things are flying around the park.

The new skipper insisted that it is the same when he is batting, having that slightly detached nature, adding that he can relate it very much to batting.

Morgan said that the talent in the squad is huge, and he sees this as a really exciting opportunity to win a World Cup. 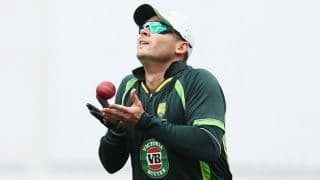