The authorities in the trans-Tasman belt have ramped up their fight against match-fixing.

A gag order has been imposed on ground curators in Australia as cricket authorities in the trans-Tasman region have reportedly ramped up their fight against match-fixing.

According to stuff.co.nz, groundsmen at Australia‘s international venues spend much of the year away from the spotlight, but when the Test circuit turns up each year, they are in demand for giving information on the pitches that they are preparing, and how they expect the match to pan out.

Traditionally, they spoken openly about the decks they have produced in the lead-up to matches, but now, with the ICC World Cup 2015 a little over 100 days away, Cricket Australia and the International Cricket Council have issued edicts to the groundsmen not to speak.

Curators from across Australia have been flown to a meeting in New Zealand and told that under strengthening anti-corruption measures, they are no longer permitted to provide detailed information about their pitches before matches.

They, however, can talk in general terms, but have been instructed not to offer specifics, such as whether they would advise batting or bowling first or their beliefs on who the pitch might favour.

The threat posed by illegal overseas bookmakers in a summer featuring the world’s third largest sporting event has cricket chiefs braced with a counter-offensive that stretches far beyond their directive to groundsmen.

With the World Cup in mind, the ICC last year signed a memorandum of understanding with the Australian Federal Police allowing information to be shared between the governing body’s anti-corruption unit and the secretive agency. A similar arrangement, reports in New Zealand say, is to be in place with police in this country where there are six of the 14 World Cup venues.

There is expected to be a strong focus on so-called “pitchsiders” attempting to take advantage of slight delays in the broadcast of games overseas by transmitting play-by-play data from their seats. 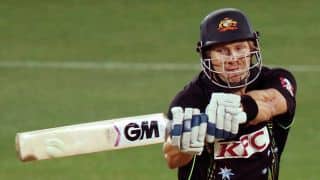 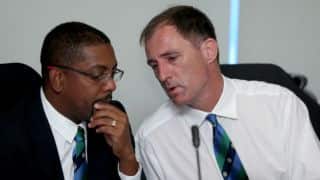