"The amount of sledging and disrespect shown by players to each other was bad."

International Cricket Council (ICC) chief executive David Richardson said on Tuesday the global governing body would come down hard on players who ‘sledged’ or verbally abused their opponents at the upcoming World Cup.

During the course of an extensive interview on the ICC website, former South Africa wicketkeeper Richardson also said officials were determined to continue their campaign against illegal bowling actions and added he was confident the World Cup would not be blighted by match or spot-fixing.

Several high-profile incidents in recent months have led former Australia captain Ian Chappell to say he fears it can only be a matter of time before things get so heated that a physical clash ensues.

Meanwhile, New Zealand great Martin Crowe has called for the introduction of a yellow and red card system common to many other sports in a bid to punish poor on-field behaviour in cricket, which has traditionally prided itself on being a “gentlemen’s game”.

However, he insisted the ICC had been stressing to on-field umpires the need to stop such conduct at its source, with the World Cup in Australia and New Zealand now less than a month away.

“Over the last six months, or even going back further to the last Ashes series, there have been too many examples of player behaviour going too far and overstepping the boundaries of acceptability,” Richardson told icc-cricket.com.

“The amount of sledging and disrespect shown by players to each other was bad.

“Since then, we have done a lot of work with our umpires and match referees to ensure they are much more pro-active in terms of policing behaviour on the field and — when players do overstep the mark — taking appropriate action.”

He added: “Over the last three or four months, you have seen 12 ICC code of conduct charges laid against people for exactly that — disrespectful behaviour on the field.

“For the ICC Cricket World Cup 2015, it will be no different — and at all pre-event briefings with the teams, the match referees will be making sure that message is delivered loud and clear.”

The past year has also seen a significant increase in the number of bowlers banned for suspect actions, with Pakistan off-spinner Saeed Ajmal the most high-profile case.

“The game realised we had a significant problem — and there were just too many bowlers, from all teams, bowling with suspected actions,” said Richardson.

“I think we have made very good progress in identifying those bowlers, sending them off to be tested and, where necessary, suspending them until they can remedy their actions,” he added.

As for the scourge of fixing, a bullish Richardson said: “On the corruption side, it’s safe to say we’re the best prepared we’ve ever been.

“It will be very difficult for anybody outside of the game to come and even attempt to try and corrupt players, umpires or anybody involved in the World Cup, to try and fix a match.” 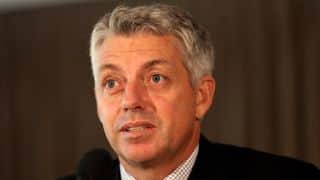