India play Pakistan at the Adelaide Oval in Match 4 of the ICC World Cup 2015 on Feb 15.

It is a measure of the heady attraction of an India–Pakistan cricket contest that South Australia, whose capital is Adelaide, has consciously bid for this World Cup match at the famed Adelaide Oval next month.

The province with a gateway as its emblem, and which borders all five other Australian states, deliberately decided to bid for this match, when other cities were going for games featuring the home team, South Australia Trade and Investments Minister Martin Hamilton-Smith told IANS in an interview here.

“South Australia wanted to have the India-Pakistan game. Other states wanted to attract an Australian game, Australia against anybody. “Our premier said no. He said let’s be strategic and bid for that game to be held in Adelaide. It appears that no other state was after this one,” the minister pointed out.

Hamilton-Smith gave proof of the successful South Australian strategy on the India-Pakistan match slated for Feb 14. “We had 50,000 tickets sold within twelve minutes. I’ve heard that 20,000 Indians are coming to Adelaide to watch the game. I think around a billion people are going to watch the match,” he said.

Indeed, in line with the “outdoors” spirit of a sports-loving country, the minister has other plans regarding India. “Indians love their cricket and I want an inbound business mission from India coming every cricket season in January so they can come and watch the best of cricket at the Adelaide Oval and see how beautiful it is,” Hamilton-Smith said. 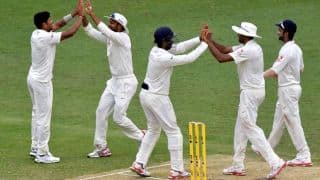