Ishant last played for India in the One-dayers in January against New Zealand.

Terming India‘s prospects as very strong in the 2015 World Cup, former Australia captain Allan Border said that a fit Ishant Sharma should be a key figure for the Men in Blue Down Under.

Paceman Ishant, who was included in India’s ODI squad against the West Indies after Mohit Sharma was ruled out due an injury, is working hard to get back and Border said that it’s time the Delhi bowler gets a chance. Ishant last played for India in the One-dayers in January against New Zealand.

“Ishant Sharma should be a key figure if he is not injured. He is a good bowler and will do well in Australian conditions,” Border, 59, said during the ‘Aaj Tak Salaam Cricket’ conclave organised at a city hotel today.

Commenting on Mahendra Singh Dhoni‘s Test captaincy, Border said that India’s ‘captain cool’ has really led from the front but he is running out of ideas in the longer format. “Look he has a very strong personality. But he should be more pro-active as a leader in the Test format,” he said.

Sitting alongside Steve Waugh and Ricky Ponting, Border opined that Team India do have the “skills to match the best sides in the world but they will certainly have to have more “attitude” and “self belief” to make a mark in Australia and New Zealand. “India certainly have very good players in their team and if they can combine with the right kind of attitude then they can certainly do good in the upcoming World Cup,” the 1987 World Cup-winning captain said.

Prodded on Australia’s take on ‘attitude” and what they call “sledging”, Border stepped out of his crease to insist that Aussies play their game hard and it’s the only way they have learnt cricket. “We play our cricket hard and fair. No apologies for it. That’s our style of playing cricket (referring to what the world calls sledging). But we have always respected the rules of the game. You got to have the right kind of attitude,” said Border with a chuckle. 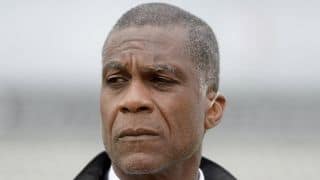