Kamran, if selected, however will not be the first choice wicketkeeper as this position is now held by Sarfraz

Discarded wicketkeeper-batsman Kamran Akmal could be a surprise inclusion in Pakistan’s final World Cup squad after he continued his rich vein of batting form in the final of the Quaid-e-Azam Trophy Gold league at the National Stadium.

Kamran, out of favour with the selectors in the one-day format since last year after the Champions Trophy in England, was unbeaten on 131 on the fourth day of the five-day final for his team, National Bank against Sui Northern Gas, which is close to completing a hat-trick of Quaid Trophy titles.

“Kamran is in serious consideration for the final World Cup squad but not as a wicketkeeper but as a specialist batsman,” a source close to the national selection committee said.

The source said that another wicketkeeper, Peshawar’s Muhammad Rizwan, who also scored a superb 224 in the final, is also in the contention as the selectors had included him and Kamran in the preliminary squad of 30 probables.

“Rizwan has also scored big runs this season in the Quaid Trophy and is under consideration, although Kamran’s previous experience in international cricket could win him the nod from the selectors for the position of the third opener in the side after Ahmed Shehzad and Muhammad Hafeez,” the source said.

“Kamran, if selected, however will not be the first choice wicketkeeper as this position is now held by Sarfaraz Ahmed,” the source added. He said Kamran had impressed the selectors with his innings yesterday in the final, with chief selector Moin Khan also present at the stadium to watch his unbeaten innings.

“Earlier also in the tournament he has scored a heap of runs, including a career best 275 to help National Bank qualify for the final and he could be a surprise recall for the World Cup as the third opener,” the source insisted.

He said head coach Waqar Younis and manager Moin Khan were aware of the fact that Kamran had previous experience of not only playing in the World Cup but also in Australia and New Zealand, the two venues where 2015 World Cup will be held.

“But the final nod for Kamran will come depending on whether he continues his purple patch in the Pentangular one-day Cup, which begins from December 31. The selectors will be closely watching the performance of some players including Kamran in the tournament after which the selectors plan to announce their final World Cup squad on January 7,” the source added. 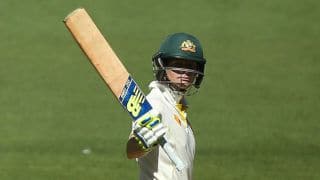 Cricket Australia trademarks '63 not out' in memory of Phillip Hughes