He last played for England in the 2013-14 Ashes and subsequent One-Day Internationals (ODI).

Former England batsman Kevin Pietersen has said he wants England “to do well” in the impending World Cup despite being acrimoniously sacked by the England and Wales Cricket Board (ECB), leading to a long-enduring verbal fight between the two warring parties.

Pietersen endured a turbulent relationship with the ECB and team-members during his international career, often getting involved in bitter disputes and ugly controversies.

He last played for England in the 2013-14 Ashes and subsequent One-Day Internationals (ODI), and was never recalled to the side after it, with the ECB ultimately sacking him, a move that led to widespread varied reactions from all quarters of the cricketing community.

The 34-year-old himself never backed down from his position and has continued to shadow fight with ECB and his former team-mates revealing – secrets of the team dressing room and other disclosed information – either through stinging newspaper columns or his autobiography “KP: The Autobiography”.

But Pietersen, despite claiming to have been reduced to tears and conceding he still didn’t know why he was no longer an England player, wished his former team the very best for the upcoming World Cup, starting Feb 14.

“I want England to do well in the World Cup,” Pietersen was quoted as saying by the Cricket Australia (CA) website Wednesday.

The South Africa-born batsman, currently in Australia playing in the Big Bash T20 league, also said that he doesn’t regret his decision to chose England over the country of his birth for playing international cricket.

Pietersen made his first-class debut for South African domestic Natal in 1997 before moving to England, after voicing his displeasure at the racial quota system in place in the country. 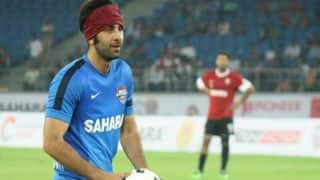