The Ranji showing can make or break the probables' case, who are not part of the Test team in Australia.

New Delhi: Dec 4, 2014
Mohit Sharma is one of the nine fast bowlers among the 30-World Cup probables chosen today and the Haryana pacer is eying another successful Ranji Trophy season to make the final Cup squad in a highly competitive environment.

Sharma, who has represented India in 11 ODIs and four T20 Internationals, last played for the country in the opening ODI against the West Indies in October before being ruled out for the rest of the series with shin pain.

But he is fully fit now and eager to make an impact in the premier four-day domestic tournament starting on Saturday.

“It obviously feels good to be amongst the probables. I have been working hard on my fitness after I got injured. The competition (for making the final 15 for World Cup) is surely tough but selection anyway is not in my hands. What I can and want to do is give my best in the Ranji Trophy,” Mohit told PTI from Patiala where he will be leading Haryana’s pace attack against Punjab.

The 26-year-old is competing against the likes of Bhuvneshwar Kumar, Mohammed Shami, Umesh Yadav, Varun Aaron, Dhawal Kulkarni, Stuart Binny and Ashok Dinda, who all figure among the Cup probables.

The Ranji showing can make or break the probables’ case, who are not part of the Test team in Australia.

Mohit like other pacers in the reckoning would have liked to prove himself in the tri-series in Australia. But that scenario is out of the picture as the deadline for submitting the 15-man squad to the ICC is January 7. The tri-series only starts on January 18.

Asked about the plentiful options available in the pace department, Mohit said the development can only be good for Indian cricket.

“It is competitive for sure but at the same time it is a positive sign that there are so many pacers to choose from,” said Mohit, who bagged two wickets in three games after returning to action in the Vijay Hazare one-day tournament last month.

He has eleven international wickets to his name. Mohit received his maiden India call-up after tasting success while playing for IPL franchise Chennai Super Kings. 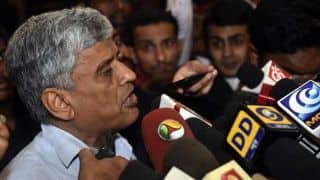 Sanjay Patel: It is a very balanced team selection