The second warm-up match between New Zealand and Zimbabwe at the Bert Sutcliffe Oval in Licoln on Monday was abandoned due to persistent rain. New Zealand ended their innings on 157 for the loss of seven wickets in 30.1 overs with Martin Guptill scoring a healthy century off 84 balls.

Earlier, New Zealand skipper, Brendon McCullum won the toss and elected to bat first as they were off to a shaky start with the first wicket falling in the very first over as the skipper himself departed for eight with the score reading nine. With 19 more added to the total, it was Kane Williamson, who too departed for a mere six after Tinashe Panyangara made him caught off Craig Ervine.

It was followed by a 42-run stand between Ross Taylor and Guptill, before Taylor departed for mere 11 off Elton Chigumbura after being caught off Tendai Chatara and soon to follow him after another 19 runs was Corey Anderson, who too was dismissed for a cheap six by the same man.

New Zealand failed to build any good partnership as after 20 more runs, it was Tom Latham, who departed for just nine after Tafadzwa Kamungozi made him caught off Sean Williams. However, it soon followed a 40-run stand between Daniel Vettori and Guptill and it was at the score of 149, when Vettori was dismissed for just six.

Following his dismissal, Guptill brought up his century in 84 balls, before being dismissed a couple of balls later by Sikandar Raza, who made him caught off Tawanda Mupariwa, before the rain interrupted the game.

For Zimbabwe, it was Chigumbura and Panyangara, who were the top wicket-takers in the innings, claiming a couple each of 21 and 28, respectively. Later after almost two-hours of rain, the match was called off as the rain persisted. 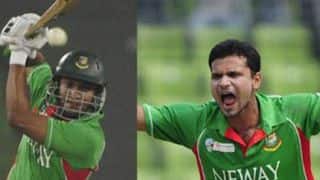 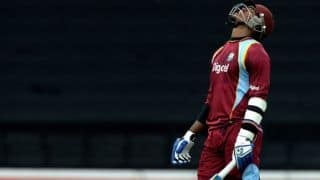