Ajmal said he had always played cricket with a positive mind.

Karachi: Off-spinner Saeed Ajmal has said that he was disappointed at not playing the ICC World Cup 2015 but he wanted to see Pakistan change history by defeating India in the mega event.

“Who doesn’t want to play in a mega event like the World Cup. I feel the same way. But even from here I would love to see our players finally beat India in a World Cup,” Ajmal said today.

“I have a feeling this time history will change because this Indian team is undergoing lot of problems and don’t appear to have adjusted as yet to conditions in Australia,” Ajmal said.

The veteran off-spinner said he hoped Pakistan didn’t face anymore injury problems in the World Cup as this would be difficult to overcome for them after losing Junaid Khan and Mohammad Hafeez.

Ajmal said he had always played cricket with a positive mind and the Pakistan team should also adopt the same approach throughout the World Cup. The off-spinner said he was confident he would find rhythm with his modified bowling action after playing 10 to 12 matches at the club and grade two level.

“The good thing is I am facing no problems with my modified bowling action and I am feeling more confidence bowling some new varieties.”

Ajmal got some good news this week when English county, Worcestershire offered him another contract for this season after he represented them for a short while last year. Pakistan’s left arm pacer, Mohammad Aamer, who is on a comeback trail from a five year ban for spot fixing also feels that Pakistan have their best chance to defeat the Indians.

“What gives me confidence is that this time the Indian team’s preparations have also not been very good and they are also under pressure because of their recent defeats. I just want to see this tradition of losing to them in World Cup change this time, the 22-year old said.

Aamer said that Indo-Pak matches were always pressure games and that is why many times Pakistan had lost after coming very close to victory against India. Aamer appeared in his first proper club match on Monday in Lahore since being suspended from cricket in late 2010 for spot fixing. 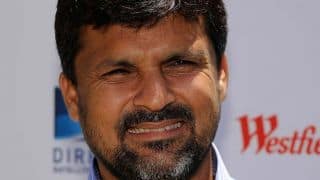