South Africa batsman Faf du Plessis believes they have a team that can win the upcoming ICC World Cup 2015 to be held in Australia and New Zealand Feb 14-March 29.

Talking about his team’s chances in the quadrennial One-Day International (ODI) tournament, du Plessis said, “It’s too hard to judge on past experience. For me, it’s the team you have and the results you have been getting. We have got a really good team at the moment and we’ve been winning a lot of games.” South Africa reached semi-finals in 1992, 1999 and 2007 editions of World Cup.

“In the past, we went to a World Cup where we probably weren’t the best side. People judge you on not winning the World Cup. This time I feel we’ve got a really good side and we’ve been winning, so everything is stacking up nicely for us now,” he was quoted as saying by Sydney Morning Herald Wednesday.

South Africa, being coached by Gary Kirsten who coached India too in 2011 and helped them win the World Cup, are getting ready to face Australia in a five-match ODI series starting Friday. The 30-year-old Du Plessis said that the series is all about preparing for the World Cup.

“Winning is also important and this will be a very good challenge for us playing Australia in their home conditions, we’ll probably play them in a semi-final or something like that in the World Cup.” Bangladesh vs Zimbabwe, 3rd Test at Chittagong, Day 2: Bangladesh bowled out for 503 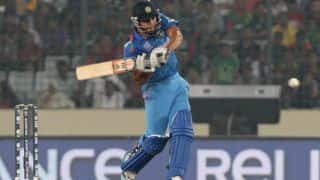