Nevertheless, Dimuth Karunaratne along with Dilshan took the score to 151.

Sri Lanka finished their innings on 279 for the loss of seven wickets against South Africa in the 3rd warm-up match at Hagley Oval in Christchurch on Monday. Tillakaratne Dilshan was the highest scorer in the innings scoring a healthy century off 80 deliveries. South Africa have been set a target of 224 from 30 overs.

Earlier, South Africa skipper, Hashim Amla won the toss and elected to field first. Sri Lanka were off to a shaky start as they lost opener, Lahiru Thirimanne for just a run in the second over of the game. However, Dilshan and Kumar Sangakkara took control for the second wicket and put up a healthy 76-run stand, before Sangakkara was dismissed for 31 by Imran Tahir. ICC Cricket World Cup 2015: SCHEDULE & MATCH DETAILS

Nevertheless, Dimuth Karunaratne along with Dilshan took the score to 151 before Dilshan departed after scoring his century. It was followed by another healthy partnership of 60 runs between Karunaratne and skipper, Angelo Mathews and it was at the score of 211, when Karunaratne departed for 46. With just 19 more added to the total, Dinesh Chandimal fell for just five after being trapped leg-before by Wayne Parnell. ICC Cricket World Cup 2015: POINTS TABLE

However, Mathews steered the innings with a score of 58 until on 275, he fell to Kyle Abbott and soon to follow him was Thisara Perera for four off the same man, before the rain hit and stopped the game. For South Africa, Abbott was the highest wicket-taker in the innings with a figure of three for 37 as South Africa require 224 from 30 overs. 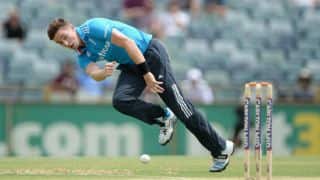