The trophy was received at the ICC Cricket Academy by the UAE coach Aqib Javed.

The ICC Cricket World Cup trophy reached the United Arab Emirates (UAE) as part of its world tour, ahead of the 2015 World Cup, to take place in Australia and New Zealand. The trophy was received at the ICC Cricket Academy by the UAE coach Aqib Javed and will be displayed at various public locations.

“This trophy holds a special place in every cricketer’s heart. It is the biggest prize in international cricket. The UAE will be playing in the ICC Cricket World Cup for the first time since 1996 and we are confident of putting in a performance that will make our fans proud,” said Javed.

“We are thrilled to welcome the trophy to the UAE. As the UAE National Cricket team embarks on their journey to the World Cup, we look forward to seeing the people of the UAE rally behind, and support it in its mission,” added Emirates Cricket Board CEO David East. The UAE will play its first match on 19 February against Zimbabwe in Nelson, New Zealand. India vs West Indies 2014: No threat to the series, clarifies BCCI 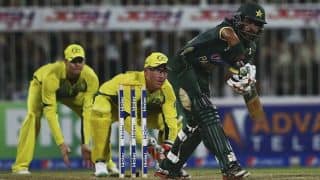