MANCHESTER: As the skies cleared to bring out a sunny Wednesday in Old Trafford, India s bowlers picked up from where they d left off on Tuesday. On Day 2 of the first ICC Cricket World Cup semifinal yes, you heard that right, New Zealand could add just 28 runs to their overnight score of 211 and lost three wickets to set India a target a target of 240 if they are to make their fourth World Cup final. ALSO READ: Rain forces India-New Zealand semi-final into reserve day

Ross Taylor was the first New Zealand wicket to fall on the reserve day, run out courtesy a direct hit from Ravindra Jadeja in the deep while going for a second run. Bhuvneshwar Kumar then sent packing his overnight partner Tom Latham the very next ball, with Jadeja once again proving his credentials as perhaps the best fielder in the world. Jasprit Bumrah bowled a clinical last over giving away seven runs, while Bhuvneshwar finished with 3/43.

Tuesday might have been the big semi-final, but the narrative remained same India s pacers, a sluggish surface and New Zealand s two most experienced batsmen bailing them out of trouble. Under heavy cloud cover, Bhuvneshwar and Bumrah had the New Zealand batsmen struggling to score, but half-centuries from Kane Williamson and Taylor held the innings together.

Drama unfolded from ball one. Bhuvneshwar got the ball to move after pitching and it rapped Martin Guptill on the pads. Declared not out by the umpire, Virat Kohli went upstairs. But with the ball missing leg, India lost their review first ball. That however didn t mean New Zealand had it easy. In fact, Bhuvneshwar and Bumrah were so tidy with the new ball that it took 17 balls for New Zealand to score their first run.

Guptill s woeful form continued. Bumrah received extra bounce and the opener, poking outside off, edged to Kohli at second slip. For the sixth time, Williamson walked out inside five overs and was immediately tested by Bumrah, Bhuvneshwar s pace and the overcast weather aiding them. There wasn t much swing, but some movement off the surface. Williamson brought out his dabs to third man and fine leg, but India, with a short point, backward point and a gully had him working hard for runs.

A cover drive from Henry Nicholls brought the first boundary in the eighth over. Nicholls struggled to get going against India s frontline pacers but ticked along well against Jadeja, whom he swept effectively to collect a boundary early. Nicholls survived an appeal but was done in by a turner from Jadeja which beat his defence. Off went the right lights to end Nicholls hard-working 28 off 51.

But Williamson did what he does best. Rotate the strike and keep the scoreboard moving. 27 for 1 after 10 meant New Zealand could not afford to waste too many overs and he cashed in on the rare loose deliveries bowled by India. Hardik Pandya s lack of pace couple by a short of a length deliveries allowed Williamson to collect two boundaries, but from there, India tied them down remarkably. Yuzvendra Chahal conceded 28 off his first six overs, and with Pandya and Jadeja, gave New Zealand just 20 runs between over 19 and 27.

Williamson hoicked Chahal for the first New Zealand boundary in 81 balls. Taylor survived a couple of close LBW appeals and a few away spinners that swished past his off stump. Taylor s first boundary was an edge past the wicketkeeper, but the next one was executed with a lot more confidence when he slapped Chahal towards deep midwicket. Slowly, but steadily, Taylor and Williamson worked their way to yet another half-century stand off 73 balls.

Jadeja s last over is where Williamson decided to go for it. It was a mixed bag: a loft over extra cover for three, almost a slog sweep for a four, twice beaten. Next over, he tried to attack Chahal as well but perished. Chahal offered some flight and the ball dipped, gripped and turned, enough to result in a false shot from Williamson. Reaching for the ball, Williamson sliced it to Jadeja at backward point to deal New Zealand a body blow.

The Taylor-de Grandhomme partnership had raced to 35 off 19 balls but Bhuvneshwar returned to break the partnership. After Taylor reviewed an LBW call to earn a reprieve, de Grandhomme, opting for a uppish cut, nicked to Dhoni. A comical overthrow which resulted in New Zealand converting a single into three was followed by a couple of singles before rain ensured no further play was possible on Tuesday. 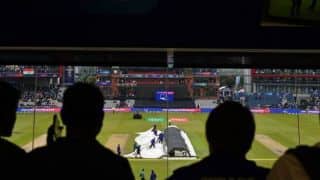 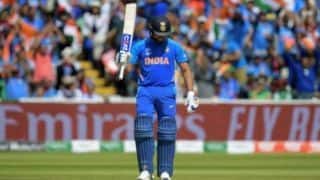