The Proteas have lost all of their nine knockout matches in International Cricket Council (ICC) tournaments in the past 15 years.

Infamous as chokers in big tournaments, South Africa face the formidable task of displaying their best in the ICC World Cup 2019 as a couple of their star players have bid adieu to international cricket.

The Proteas have lost all of their nine knockout matches in International Cricket Council (ICC) tournaments in the past 15 years. (ALSO READ: CSA putting Pink ODI, New Year’s Test up for auction: report)

It was way back in 1992 when South Africa first featured in the 50-over World Cup, after being reinstated as a Test playing nation. Although not much was expected from them, the then skipper Kepler Wessels and his boys stunned everyone by entering the semi-finals.

In the semi-finals against England, South Africa needed 22 runs from 13 deliveries. At that stage, it seemed they would book their place in the final comfortably. (VIDEO: Faf du Plessis compares wicketkeeper David Miller to MS Dhoni)

But a 10-minute delay due to rain saw the target revised to 22 runs off 1 ball, based on the Duckworth-Lewis (D/L) method, and an unlucky South Africa had to exit the tournament.

Some of the Proteans stars have also taken retirement, which might hamper the preparations for the prestigious cup. AB de Villiers, Morne Morkel players who could turn the match in their favour at any point of time had retired and it may cost them. (ALSO READ: South Africa will lose lot of players unless they come up with a plan: Morne Morkel)

Despite the several heartbreaks, there were few positives for the country. They hold the record of the highest successful run chase and made the highest total in an iconic match against Australia on March 12, 2006. But the record now has been surpassed.

In the 2019 tournament, if South Africa can fill the void left by these two players and trust their skills, they might shrug off the chokers tag. 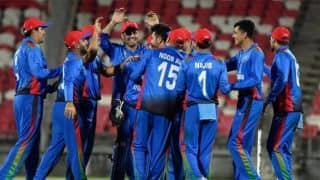