Meanwhile there was a worrying moment for England on Saturday when fast bowler Mark Wood left the field injured.

Australia‘s David Warner and Steve Smith were both jeered on Saturday in their first match against England following a year-long ban for ball-tampering in what could be a sign of things to come during the World Cup and Ashes.

There were scattered boos when opening batsman Warner walked out to bat in a World Cup warm-up match against tournament hosts England at Southampton after Australia lost the toss.

And when the left-hander arrived at the crease, one fan shouted: “Get off Warner you cheat.”

But there were more boos as he walked off to be replaced by Smith, coming in with Australia 82 for two in the 17th over.

The BBC reported there were a few chants of “cheat, cheat,cheat”, although a lone Australia fan shouted “Get ’em Stevie!”.

Warner and former Australia captain Smith only returned to international duty earlier this month after they both completed 12-month suspensions for their roles in a ball-tampering scandal in South Africa.

The disgraced duo’s first match in England this tour was a hastily arranged, unofficial warm-up match against the West Indies on the nursery ground at Southampton on Wednesday. (ALSO READ: Moeen Ali hopes English fans treat Smith and Warner decently)

But that fixture was played in front of fewer than 30 spectators whereas there were several thousand in the main arena on Saturday.

Reigning world champions Australia are set to be in England for more than four months in a tour featuring both the World Cup and a five-Test Ashes series.

Meanwhile there was a worrying moment for England on Saturday when fast bowler Mark Wood left the field injured.

Wood, whose career has been blighted by ankle problems, managed just 3.1 overs on Saturday before experiencing what an England spokesman said was “some left discomfort”.

The Durham quick was now set to be assessed by medical staff before a decision was taken on whether he would play any further part in the match.

Two balls after Wood went off, Jofra Archer — on as a substitute — injured himself fielding on the boundary and left the field in turn although he did come back on. (ALSO READ: Australia have a really good chance at reclaiming trophy, feels Ricky Ponting)

And when fast bowler Liam Plunkett was briefly back in the changing room, England assistant coach Paul Collingwood — 43 on Sunday — fielded for a few overs.

World Cup favourites England, fresh from a 4-0 series rout of Pakistan, had gone into Saturday’s match without one-day international captain Eoin Morgan after he suffered a finger injury during fielding practice on Friday.

Morgan, however, is expected to be fit to lead England in the opening match of the World Cup against South Africa at the Oval on Thursday. 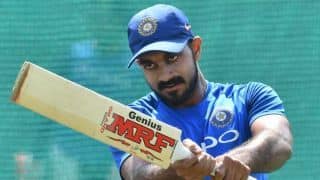 Cricket World Cup 2019: She will be my strength and inspiration: Grieving Asif Ali rejoins Pakistan team after ‘warrior’ daughter’s funeral