Naveed was found to have violated Article 2.1.5 of the ICC Code of Conduct for Players and Player Support Personnel.

United Arab Emirates fast bowler Mohammad Naveed has been fined 15 percent of his match fee for breaching the ICC Code of Conduct.

The incident happened at the end of the seventh over of his side’s match against Afghanistan in the ICC Cricket World Cup Qualifier 2018, when Naveed questioned the umpire about his not-out decision.

Naveed was found to have violated Article 2.1.5 of the ICC Code of Conduct for Players and Player Support Personnel, which relates to “showing dissent at an umpire’s decision during an international match”.

In addition to the fine, one demerit point has been added to Naveed’s disciplinary record.

After the match, Naveed admitted the offence and accepted the sanction, proposed by match referee David Jukes. As such, there was no need for a formal hearing.

Level 1 breaches carry a minimum penalty of an official reprimand, a maximum penalty of 50 per cent of a player’s match fee, and one or two demerit points 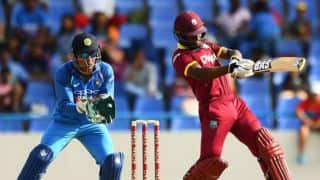 India-West Indies Kochi ODI: Experts' views to be considered if match can be held on football ground