Scotland continued their unbeaten run in the ICC World Cup Qualifiers 2018. This time they steamrolled UAE by 73 runs in the Super Six leg of the tournament.

Scotland continued their unbeaten run in the ICC World Cup Qualifiers 2018. This time they steamrolled UAE by 73 runs in the Super Six leg of the tournament. Despite the big win, Scotland skipper Kyle Coetzer still believes there is further scope of improvement for his side.

“Very pleased for the guys, and very pleased for everyone back home who has contributed to get us to where we are at the moment. We’ve enjoyed this performance, as we have every one thus far.

“Still not quite that full performance we’re looking for, but we’re getting there. The batting was hugely exciting today,” Coetzer was quoted in a report from ESPNCricinfo after his side notched up their fourth straight win in the tournament.

WATCH | Scotland’s @crossy16 looks back on today’s win against UAE in Bulawayo after smashing 114 #followscotland pic.twitter.com/5zlnebv5e6

Electing to bat at Bullawayo, Scotland got off to a good start. Openers Matthew Cross and Coetzer added 68 for the first wicket. Coetzer fell after a quick 43 but wicketkeeper Cross carried on and registered his second ODI hundred. Callum MacLeod’s brisk 78 and cameos from Richie Berrington (37 off 21*) and George Munsey (30 off 14) propelled them to 322 for 6 in their 50 overs.

Scotland had reduced UAE to 117 for 6 before Muhammad Usman (80) and Ahmed Raza added 105 for the seventh wicket, providing some respectability to the side’s defeat. Chris Sole, who started with a 16-run over, finished as the most successful bowler, bagging 4 for 68 off his nine overs.

Man of the Match: Matthew Cross 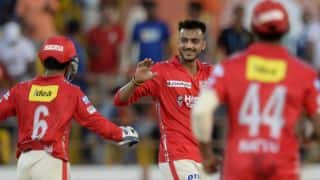