In Match 23 of the ongoing ICC World Cup Qualifiers 2018 Playoffs, Nepal trounced PNG by 6 wickets in pursuit of 115. Electing to bowl first, Nepal bowlers Sompal Kami and Karan KC triggered PNG’s struggles from the word go. Their discipline put a lid on the scoring, and the momentum was carried forward by Sandeep Lamichhane and Dipendra Singh Airee. The duo shared eight wickets to restrict the opposition for 114 in 27.2 overs. The target was eventually overhauled with 168 balls to spare. Airee stood firm with the bat as well.

WHAT A WAY TO WIN IT!

Dipendra Singh Airee smashes a six to win the game for Nepal and bring up his half-century! pic.twitter.com/TOP3M6XMD8

By virtue of this win, Nepal have come closer to attaining the coveted ODI status. They will now be eagerly looking forward to the (ongoing) Netherlands vs Hong Kong match. If Netherlands win, they will secure the ODI status today itself. If Netherlands lose, Nepal will have to beat Hong Kong.

Kami and KC gave nothing away in the early overs. Tony Ura’s 23-ball 11, Chad Soper’s 35-ball 10 and Sese Bau’s 21-ball 11 were proof of a disciplined bowling effort. There was little application from PNG, and wickets tumbled consistently with the arrival of Lamichhane and Airee. The pair broke the backbone of PNG’s lower order. From 51 for 2, PNG were reduced to 78 for 6. Later on, they sunk further from 106 for 6 to 114.

In reply, Nepal seemed to lose the plot early. Gyanendra Malla, Anil Sah and the big fish, Paras Khadka, were all dismissed with the score on 35 for 3. But Airee, at No. 4, wasn’t willing to stay back; he counterattacked and stitched a vital 67-run stand with Aarif Sheikh (26) to ensure an easy win. 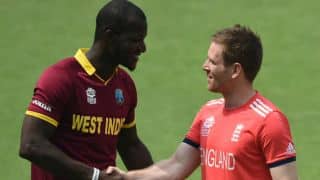